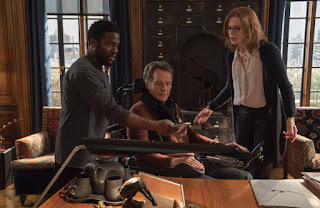 The French 2011 film The Intouchables, which was itself inspired by the life of Philippe Pozzo di Borgo has had two other remakes in the Indian Oopiri and the Argentinian Inseparables. This is the third remake directed by Neil Burger and written by Jon Hartmere starring Bryan Cranston and Kevin Hart. It really gives Hart a chance to show some serious acting moments and not the usual manic characters of his comedy outings. Of course with Bryan Cranston and Nicole Kidman will make anyone look better by association. The French film was nominated for César Award for Best Film and awarded Omar Sy for the Best Actor. This film is not quite up to par to Intouchables, but decent enough to bring one to the theaters in January for mindless entertainment.

Kevin Hart plays a parolee Dell Scott who needs to have his job searches signed to keep him out of jail which leads him erroneously to the applicant line for a Life Auxiliary at a penthouse of Phillip Lacasse (Bryan Cranston). Yvonne (Nicole Kidman) his business manager helps him interview prospective aides, but they are boring and pretentious. Enter Dell who is thinking he's applying as a janitor, demanding that they sign his papers. His rough and brash attitude intrigues Phillip who hires him giving him overnight to think it over. We are then introduced to Dell's ex and his son who live in a moldy leaking tenement apartment. He realizes he needs to work to make their lives better.

Yvonne is not happy with Dell joining their household and tells him he has three strikes before they fire him. Dell has to learn how to feed, dress and attend to the more personal needs for Phillip who is paralyzed from the neck down in a paragliding accident. Dell must be on call 24/7 and it takes him awhile before he adjusts to just thinking of himself. He also brings Phillip out of his shell that he has built by grieving over his beloved wife who passed from cancer and of course the loss of mobility. He introduces Dell to opera and Dell introduces him to the Queen Aretha Franklin.

The story has the usual manipulative and formulaic tropes of poor person of color and rich white guy bromance. They are about as opposite as two people can possibly be, but they find common ground. The issue of race doesn't seem to be the main focus except for Phillip's neighbor Carter Locke (Tate Donovan) who reminds Phillip that he lives in the building with his ex-convict employee. The more prevalent issue is the socioeconomic contrast of their lives. The haves and the have nothings. Although Phillip is stupidly rich enough to buy the Nets, but not rich enough to buy the Mets, he's still unhappy stuck in a body that won't move. While Dell, healthy and street smart, is mired in his inability to get out of his own way while trying to stay in his son's life. Of course it all works out in the end, and the journey there is entertaining enough to be worth the popcorn.
(Review by reesa)

Email ThisBlogThis!Share to TwitterShare to FacebookShare to Pinterest
Labels: The Upside review