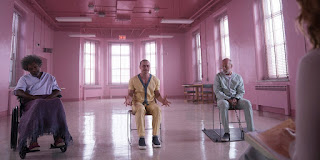 M. Night Shyamalan knocked everyone's socks off with the 1999 Sixth Sense. Then Unbreakable in 2000 saw some success, but subsequent films were interesting and disappointing. The 2016 Split garnered positive reviews and was a huge financial success. The character from Split was cut from Unbreakable, so the Eastrail 177 Trilogy was created by uniting the Mr. Glass, David Dunn and the 23 personalities of Kevin Wendell Crumb. If you have not seen the other two films, you may be adrift as to what the heck is going on. Like all Shyamalan movies, they are finely created, with great images, sets, and setting up mystery and expectations. A lot has been made to not reveal the twist ending. So no spoilers here.

David Dunn (Bruce Willis) the only survivor of a train wreck in Unbreakable is now working in a home security store with his son Joseph (Spencer Treat Clark). Joseph has always believed in his father's superhero abilities of The Overseer. He listens to the police radio band directing him to crime to be rectified. The police are after some missing cheer leaders who have been kidnapped by former zoo employee Kevin (James McAvoy) who taunts his victims with his various split personalities who he calls the horde. The horde is ruled by Patricia, but they are physically protected by The Beast. David attempts to save the young women and confront The Beast. The police show up and arrest them both.

Sarah Paulson plays the very controlled Dr. Ellie Staple: A psychiatrist specializing in delusions of grandeur. She gets the men committed to Raven Hill. She joins them with Mr. Glass (Samuel L. Jackson), aka Elijah Price, the comic book expert, aka genius Mastermind. Mr. Glass sits in a wheel chair due to his fragile bones and heavy sedation. He's been locked up for the past 19 years after being a mass murderer while trying to convince the world that superheros walk among us. Dr. Staple tells them she only has a few days to get them to stop believing they have super powers.

The believers, Casey Cooke (Anya Taylor-Joy) was a victim of the horde who managed to survive the Beast, Mrs. Price (Charlayne Woodard), Elijah's mother who always encouraged her son that he was special, and David's son Joseph who fights to get his father released. Dr. Stable tries to convince them that they could not possibly be super, which of course they know is not true. It's a wordy script that talks about this whole superhero universe that has become a pulp mythos for nerds everywhere. Seriously what would happen if people with extraordinary abilities inhabited our world?

Bruce Willis seems vacant trying to suppress his gift of strength, stamina, invincibility, and extrasensory ability to see a person's crimes when touching them. Samuel L. Jackson has lots of close face shots looking all drugged up as Mr. Glass. It's James McAvoy who dominates the story with all the multiple personalities that slip in and out especially when a light flashes in his face. There is a lot of anticipation for this film but it's fair to say you will either love it or "meh".
(Review by reesa)

Posted by Dallas Movie Screenings at 11:19 AM

Email ThisBlogThis!Share to TwitterShare to FacebookShare to Pinterest
Labels: Glass