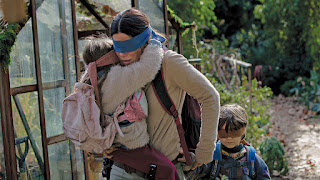 Since its release in May 2014, Josh Malerman’s novel “Bird Box” has become a hit among readers. Scan any list of recommended recent horror novels (or forum threads asking for horror recommendations) and the title is more than likely to be among the first to pop up. The novel surprisingly (since it was the author’s first published book) sold its film rights before being published with Andy Muschietti, director of last year’s hit horror movie “It,” originally in talks to direct the project at Universal. The project eventually found its way to Netflix, who produced the film for their streaming service, helmed by director Susanne Bier.

Malorie (Sandra Bullock) stands in front of a young boy and girl. The scene is tense, Bullock’s voice stern and authoritative. She hopes to ensure the children, who are raptly listening, obey her directions as she prepares them to go outside, the most adamant command – never take off your blindfolds. After this speech, the trio is outside, blindfolded and feeling their way to the river front, getting into a small metal rowboat once there. Screenwriter Eric Heisserer begins weaving the story through past and present (like the novel) showing how Malorie winds up alone with the two children she calls Boy (Julian Edwards) and Girl (Vivien Lyra Blair).

Five years previous, Malorie was an artist, recently left by her roommate (the father of her then unborn child) and occasionally helped by her sister Jessica (Sarah Paulson). Jessica arrives to take Malorie to a doctor’s appointment, commenting on her concerns over what’s happening overseas. Unware of the events in Russia, Malorie is told to turn on the TV where the footage is on almost every channel. Some sort of pandemic has started that causes people to suddenly become violent and suicidal. While the two sisters are out, the sickness finds its way to their area, resulting in Jessica crashing the car and leading to Malorie finding herself locked in a house with a group of strangers. Through their own accounts of the events and through news reports the group soon understands that people are being driven insane by something they are seeing outside and cover the windows of the house.

In addition to Malorie are Tom (Trevante Rhodes), Douglas (John Malkovich), Cheryl (Jacki Weaver), Greg (BD Wong), Charlie (Lil Rel Howery), Lucy (Rosa Salazar), and Felix (Colson Baker). The group is eventually joined by another pregnant woman Olympia (Danielle Macdonald) and, long after her arrival, Gary (Tom Hollander). Bier has gathered a strong cast for the movie, but, despite the actors involved, the cast never totally clicks together. There are obvious conflicts between the characters, particularly between Malkovich’s Douglas and almost anyone else, but the tension is never felt. Some of the roles are so small it’s surprising that a few of the bigger names agreed to take them – Paulson, Weaver, and Wong spring to mind, none of their characters are given much to do. Bullock and Rhodes manage to spark a connection with each other (the two become an item through the succession of events) and with the two children actors, but not enough to draw the audience into the movie.

Similar to the novel, the film lacks suspense. From the beginning it is apparent that Malorie is going to end up alone with the two children, leaving the viewer to wonder the why and the how of the final situation – Malorie, Boy, and Girl blindly boating down a river to a supposed safe zone – interwoven throughout the narrative. The film, as well as the book, would have worked better told through a linear story. As it’s presented, viewers know almost all of the survivors in the house will eventually die so it’s no surprise when they finally do.

A story in which the characters are required to cover their eyes doesn’t sound like an ideal choice for a feature film since film, obviously, is a visual medium. Though a good portion of the movie takes place inside a single house, a lot of the action happens while the characters are blindfolded. Instead of pulling the focus away from what can be seen, Bier and cinematographer Salvatore Totino allow the viewer to see things that the cast cannot – landscapes, windswept debris, things wildly swaying in the wind, and large shadows of things unseen looming large over the frame.

Bier’s movie winds up feeling too safe and conventional, causing the drama to often come across flat. The material calls for a claustrophobic world of darkness to bring viewers into the narrative. Why not show things from Malorie or the children’s perspective? Strip the viewer of their sense of sight. Even when the camera shows the point of view of the blindfolded characters, the blindfolds they wear are slightly see-through. Shouldn’t they have gone crazy by now from catching even a slight glimpse of the creatures? Or, was this purely a device used to keep from showing a totally blank screen? This seems to be prime material to showcase sound design, but it too is flat. Most of the action is left fixed to the screen instead of expanding around the viewing space, something that “Roma” (a drama) recently handled very well. While it makes sense, from a visual perspective, to show the outdoor footage from an omnipresent, third-person point-of-view, it doesn’t work well for the story.

“Bird Box” is by no means an unwatchable mess. It’s good enough for a watch but isn’t anything remarkable. This could have been an effective thriller / horror movie if it was handled differently.
(Review by Bret Oswald)