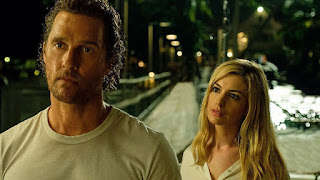 A giant tuna they call the Beast is the Moby Dick to Baker Dill's Captain Ahab. In this neo-noir thriller film written, produced and directed by Steven Knight (Locke, Redemption) has some twists and turns that are best not revealed here. It's a stylish mystery involving a heavy drinking fishing boat captain and a dangerously sexy blonde woman of his past who wants him to take her abusive husband out to sea and feed him to the sharks. Just the type of sultry film seen on TCM on Saturday nights.

Matthew McConaughey plays Baker Dill the captain of his fishing boat the Serenity. He's hired to take out tourists to hook fish while they drink and lounge. His first mate Duke (Djimon Hounsou) reminds him that he must let the charter customers to reel in the fish when one is hooked. But Dill decides he will fight the Beast himself. Dill keeps all obsessive encounters with this elusive fish in his notebook since he has yet to bring him in. Living on the small Caribbean island of Plymouth everyone knows everything what is going on with everyone else. His friend with benefits Constance (Diane Lane) who lends him money since he lost the fee from his angry charter clients so he can pay Duke and restock his ship. While drinking away his misery a woman comes in who wants to hire his charter. She also wants him to take her husband out to see and drop him in the drink. Turns out Karen (Anne Hathaway) is his ex, who left him to marry another when he was in Afghanistan fighting a war. Dill is still upset with her but mostly concerned when she says their son is also affected by his step father. She promises to pay him 10 million dollars to do the deed. Desperately in need of funds, he tries to get Duke to come back to work for him. Duke is still angry with him and advises not to take the job. Meanwhile this squirrely dude in a suit, briefcase and glasses keeps trying to meet with Dill who he keeps missing.

Karen's husband is truly a piece of work. Frank (Jason Clarke) is rich, obnoxious, and mean. Dill takes him out on the boat while Karen waits for good news on the pier. About 2/3 of the movie operates like a typical thriller with it's obvious broadly sketched characters. As delicious as everyone is digging into their roles, there's this left turn that spins everything on it's head and you have to wait out the wave to it's conclusion. Little hints and clues are set up which one can discuss during your after movie dinner. But it's worth it even it's just for the McConaughey butt shots. Worth the popcorn.
(Review by reesa)

Email ThisBlogThis!Share to TwitterShare to FacebookShare to Pinterest
Labels: Serenity