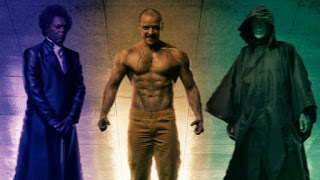 With “The Sixth Sense” in 1999, M. Night Shyamalan came on like gangbusters. That was early in his career. Somewhere along way through, he lost his ability to just make a decent stand-alone movie.

Lest we not forget “After Earth,” a Will Smith project that landed with a giant thud in the summer of 2013. Smith was proud of that entry since it not only featured his son, Jaden, but he received a co-writer credit as well.

Another dud came out a couple of years back with “The Visit,” (2015) after which I said I would not frequent another Shyamalan film until he finished his so-called trilogy involving both “Unbreakable” (2000) and “Split” (2016).

“Glass” is the final film in the series Shyamalan started with “Unbreakable” 19 years ago.

The second installment of the trilogy, “Split” (C+), dealt with James McAvoy’s Kevin, a man with 23 distinct personalities. The 24th personality, referred to as The Beast, has yet to be uncovered. At the center of this story was Anya Taylor-Joy’s Casey Cooke, a student from a dysfunctional home who encounters pure evil after a trip with friends to the zoo.

“Glass,” the final episode in the three-part series, does not disappoint. It takes the best parts of “Unbreakable” and “Split” and turns those storylines into functioning cohesive story.

Returning to the tale is Spencer Treat Clark as Dunn’s son Joseph. His mom, Audrey (Robin Wright) passed away from cancer earlier in the storyline, so it is just Joseph and David running the families’ security business.

Multiple Golden Globe-winning actress Sarah Paulson is Dr. Ellie Staple who wants to disprove the fact that these men are not superheroes, rather just normal men. This sets up what is essentially an origin story. It takes advances in modern technology, like cell phones, to disprove Staple’s notions.

The majority of the movie take place in Philadelphia and the surrounding suburbs. It convenes inside a hospital where a few individuals have tales that crisscross until the very end of the story.

“Glass” restores Shyamalan’s reputation as a great director and filmmaker who can tell a good story. Hopefully, his future endeavors will continue his approach in telling fluid and dynamic tales.


Grade: A-
(Review by Ricky Miller)