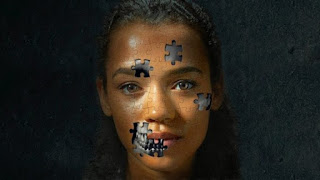 Director Adam Robitel’s “Escape Room” opens with Ben (Logan Miller) falling from an air duct into the back of an elaborate, and crammed, study. He picks himself up, looking disheveled and beaten, and scrambles, limping, for the door on the other side of the room. A maze embedded with a series of knobs, each labeled with a number, is attached to the door. Knowing that he must solve this maze to open the door he begins moving one of the numbers, triggering the room’s trap and causing the walls to begin to move. As the walls close in on him, the threat of impending death pushes him to more frantically search for the clues that will help him escape.

Using a familiar trope, the movie shifts the story back to a few days prior. The film’s first act is used to introduce the audience to three of the movie’s main characters, an odd decision for writers Bragi F. Schut and Maria Melnik since the story comes to focus on six individuals. A young woman, Zoey (Taylor Russell), is in a physics class on her college campus. The professor asks a question, Zoey raises her hand to answer, then thinks better of it. After the class is excused, the professor stops Zoey to tell her to try something new over break (the Thanksgiving holiday is coming up). Jason (Jay Ellis), a ruthless business man, and Ben, a stock boy at a grocery store, are also introduced. The three are each given a puzzle box, sent via names they know and trust, which, when solved, reveals a card inviting them to Minos Escape Room for a chance at winning $10,000 if they manage to escape.

The movie requires the audience to go with the flow and suspend belief a lot of the time. Zoey, Jason, and Ben’s solving of the boxes, shown through a montage, is a bit of a perplexing sequence since the plot of the movie depends on them, and the yet to be introduced characters, opening the box to find the invitation and, in addition, actually deciding to go to the escape room. Who’d spend that long trying to open a box right when they receive it? Only giving viewers lengthy introductions to Zoey, Jason, and Ben cues the audience in to the fact that the other three characters – Amanda (Deborah Ann Woll), Mike (Tyler Labine), and Danny (Nik Dodani) – introduced once the movie shifts to Minos office building probably aren’t too important (especially since the opening scene featured a solo and soiled Ben).

At the Minos building, the remainder of the cast is given breezy introductions. Amanda passes Ben as she walks in the building, joined in the elevator by Danny. Mike is already in the waiting room with Zoey and Jason when Amanda and Danny arrive. Ben, who was outside smoking, is the last to arrive. Dodani gives a convincingly energetic performance as the geeky Danny, who excitedly tells the group about escape rooms, serving as a guide for audience members who may not know much about them, as the six players wait for instructions. Ben decides to go back outside to smoke, causing the group to realize that they are already in the game when the doorknob breaks off in his hand revealing an oven dial. The stakes escalate when they learn the waiting room is actually a giant oven.

“Escape Room” moves the action along quickly. The group goes through multiple rooms as they attempt to escape, driven by a pounding score that attempts (and is somewhat successful) at adding to the tension. Lines are thrown in to the dialogue, awkwardly at times, to hint at the past events of each character. Items included within the rooms indicate to the six that things are not quite as they seem. The film brings to mind James Wan’s “Saw” and Vincenzo Natali’s “Cube,” though this work is a severely toned down, teen-friendly take in comparison to those, removing the excessive gore and lengthy torture set pieces and replacing them with an amusement park atmosphere.

The characters aren’t unique. They are all one stereotype or another – Danny’s the geek, Zoey’s meek and quiet but smart, Ben’s the punk, etc. Though the cast works well together and Dodani is very good in his role, the acting is about what you’d expect – serviceable enough for the movie to work. The film is well-shot, allowing viewers to take in the action and get a good look at the production design on the escape rooms. Robitel, who has predominately worked in the horror / thriller genre, has a good understanding of the material and handles it well.

Robitel’s movie doesn’t end exactly where you’d expect, though it will probably be pretty close. But, what could have been a satisfying conclusion is dragged out to an almost unbearable length, causing viewers to begin wondering if the movie is ever going to be over. Obviously, Sony thinks this is strong enough to be a franchise starter, tacking on an unknown villain (hidden in shadow and talking in a garbled, disguised voice) to leave the movie open-ended for a potential sequel. “Escape Room” is fine as a standalone movie, leaving it open-ended for a sequel is a step in the wrong direction and tarnishes the audience’s takeaway.

Not taking the final 10 minutes or so into account, “Escape Room” is a fun, entertaining movie (especially considering that January is usually considered a month full of dreck). As long as you go in with the right expectations and you’re able to suspend disbelief, you’ll have a good time.
(Review by Bret Oswald)