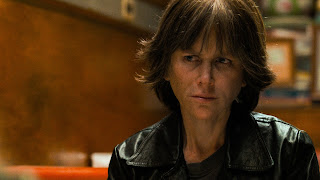 What I liked about this movie is the fact it is gritty and kind of a throwback to 1970’s American cinema that makes no excuses for its violence factor and the ratio in which it occurs. Think back to the days of “The Taking of Pelham 1, 2,3” or Martin Scorsese’s “Taxi Driver.”

It was directed by Karyn Kasuma, who helmed the 2003 science-fiction entry “Aeon Flux.” More recently she helmed 2009’s “Jennifer’s Body,” scribed by “Juno” Oscar-winning writer Diablo Cody. Neither of these are worthwhile, but they show a more diverse hand in storytelling that never fell into doldrums or the like.

What also worked for me was the presence of Nicole Kidman, who has constantly downplayed her beauty and on-screen allure and presence for years. I’ve been a fan of hers for years, even going back to 1989’s “Dead Calm,” one of the few water-based entries I actually liked.

“Destroyer,” for all intents and purposes is just a good old undercover tale about a woman, Erin Bell (Nicole Kidman) who is deep undercover in a bank heist scheme that goes awry. She shares some great screen time with co-star Toby Kebell, one of the nefarious bad guys she gets involved with.

As a point of reference, I would compare this to Christopher Nolan’s pretzel-twisting tale “Memento,” (2000) in that the storyline is not all spelled out for you in a paint-by numbers style and execution. The story never hits any dry spells, but is just very methodical in taking you to an end point where it can just settle down.

Kidman takes one of her bolder steps in presenting her character as a deeply flawed and troubled persona. She gives Bell her own nuanced identity, one that finds her own individuality.

Bell even has a daughter she is estranged from and only sees on a minuscule basis.

The setting occurs in a small town in middle America, one with a small-town police force. What was also cool was to see the characters’ interactions with each other and how each person stands out since every person had their own separate angle to the story.

“Destroyer” is a worthwhile movie since it shows Kidman in a whole new light. Although she is known for her beauty and grace, best exemplified in Baz Luhrmann’s “Moulin Rouge,” (2001) one of the few musical entries I can actually tolerate. She also displayed her charm in 1998’s “Practical Magic” with co-star Sandra Bullock as the younger sister of the pair.

“Destroyer” does what it’s supposed to do in that Kidman, known as a great actor and versatile performer, once again shows she can carry her weight with the best of them.