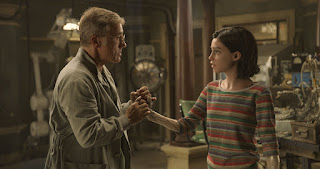 Gunnm (銃夢 Ganmu, literally "gun dream") is the Japanese cyberpunk manga series created by Yukito Kishiro in 1990. Producer James Cameron has been trying to develop this project for almost 20 years getting sidetracked by Avatar and other things. Good thing they waited for the advancements in the motion capture technology. With producer Jon Landau on board, Robert Rodriquez as director with the screenplay by James Cameron and Laeta Kalogridis the shooting began in October of 2017. The story would focus on the first four books with the Motorball sports from the third and fourth books.

The floating city of Zalem/Tiphares rains down it's metal trash to the earth below where the ground dwellers of the apocalyptic world have lived off their scrap. Dr. Dyson Ido (Christoph Waltz) finds a part of a cyborg female and rebuilds her using the mechanical body he created for his murdered daughter. Alita (Rosa Salazar) wakes up with no memory of her past life. We see the world of wonder from her perspective as she discovers oranges and chocolate. She befriends a human young man Hugo (Keean Johnson) who introduces her to the sport of Motorball which is part roller derby, Quidditch, and stock car racing, Alita is quite quick to learn and the danger in the game triggers a memory. Ido as her surrogate father doesn't want her to put herself in danger. Alita is headstrong and fearless. She decides to become a registered bounty hunter when she discovers that Ido is one too. She finds out that she is skilled in the ancient martial arts of Panzer Kunst that had disappeared when the wars destroyed the world.

Ido's ex-girlfriend Dr. Chiren (Jennifer Connelly) had escaped from Zalem but broke up when their daughter died. She now lives with Vector (Mahershala Ali) who rigs the Motorball games while Chiren works on enhancing the heavily modified cybernetics of their players. That includes stealing tech from other cyborgs with the help of Hugo and his gang. Vector gets his orders from the powerful scientist Nova from Zalem who has the ability to take over someone's body and talk through them. As Alita comes closer to the truth of who she is, Nova seeks to stop her by any means.

The live action motion capture is amazing. It's worth paying the extra to see it in IMAX and/or Dolby for the whole experience. The world that Cameron, Landau and Rodriquez have created is flawless and fascinating. Rosa Salazar gives enough heart to Alita that one is drawn totally into her dilemma. The story does get muddled in spots and the various characters are hard to keep track of with all their mechanical parts. The CGI is not so overwhelming to make you dizzy. The film sets up some sequel possibilities that will hopefully fill in the character development and explore the political world of the rich hovering city and the earth scavengers.
(Review by reesa)