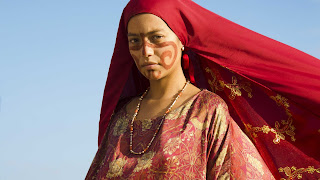 In “Birds of Passage,” co-directors Cristina Gallego and Ciro Guerra use the coming-of-age of 15-year-old Zaida (played throughout the film by Natalia Reyes) to segue into a story about the nascent drug trafficking business in Columbia, specifically within the Wayúu society in the Guajira region. Upon her reemergence from her year of seclusion, Zaida performs a ritualistic dance with suitor Rapayet (José Acosta), who wishes to marry the young woman. Her mother, Úrsula (Carmiña Martínez), agrees on the stipulation that Rapayet pays a stout dowry for her hand. Rapayet’s uncle, Peregrino (José Vincente Cotes), tells Úrsula that Rapayet has been working his way up in the business world and has found a way to work with the alijuna (a Wayúu word for outsiders). Not happy with his current position and wanting to accelerate his marriage to Zaida, Rapayet, along with his alijuna work partner Moisés (Jhon Narváez), decide to start selling marijuana to Americans working in the area by teaming with his cousin Aníbal (Juan Bautista Martínez).

“Birds of Passage” is a rags to riches story of a man (Rapayet) and his family finding wealth through the drug trade that’s differentiated by telling the story through the eyes of the region’s indigenous people. The traditions and beliefs of the Wayúu propel the story, which spans across two decades (the 1960s into 1979). Úrsula, the matriarchal guiding force of their society, interprets dreams to influence the advice she gives out. Throughout the movie, wildlife often serves as metaphorical signs as locusts and birds come to be seen as omens of things to come, causing Úrsula to warn her family of bad business dealings – not that her advice is often listened to.

As business builds up, things begin spiraling out of control. Troubles begin with workers not listening to commands, signs of disrespect that Úrsula and Peregrino think should be corrected by the reluctant Rapayet. Eventually Úrsula’s young son Leonídas (Greider Meza) – who has come of age knowing the wealth of the family’s illicit business dealings – becomes an uncontrollable brat using the family money and influence to get his way, stepping on some of the wrong toes.

Guerro previously directed “Embrace of the Serpent,” a film lushly shot in black-and-white. While “Birds of Paradise” isn’t as visually stunning as that one was, it is similarly well shot. In her ritualistic dance in the film’s opening, Zaida wears red, a color that pops off against the dull brown of the Earth and visually shows her fertility to the men. The camera nicely frames the action throughout the film, clearly showing the events unfolding on screen. The landscapes of the region are used as a visible reminder of the family’s humble beginnings. Úrsula builds a lavish mansion amongst the desolate land of the desert, the intricate architecture sticking out on the parched horizon.

Performances from the cast are fine with Reyes and Martínez standing out. Reyes believably portrays Zaida in multiple stages of her life as she grows from naïve adolescence to becoming a mother herself. At times the pacing does slow causing sections of the movie to drag on a bit too long though this doesn’t hinder the film enough to become too much of a distraction. The story arc might be predictable but “Birds of Passage” remains interesting due to its unique angle on the material.

Opens 3/1 at the Magnolia