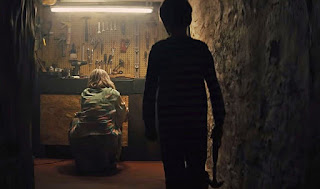 In rural Ohio, a hand breaks out of a rotting wood door that is locked by a latch from the outside. The hand gropes around, opens the latch, and a woman, Margaret St. James (Brittany Allen), runs into the nearby woods. Meanwhile, another woman is seen driving down a heavily wooded road. The scene intercuts between these two women and serial killer Edward Scarka (Paul Fauteux), the man who has kidnapped Margaret and is unaware of her escape from his house. As expected, Margaret nearly gets herself run over by the woman driving the car. Meanwhile, in an idealized suburban home in Pennsylvania, a young couple, Sarah (Taylor Schilling) and John (Peter Mooney), find that Sarah is about to give birth. Now, the scene intercuts between a SWAT team raiding the killer’s house and Sarah having the baby. The man, realizing his victim has escaped and his time has come to an end, emerges, completely naked, from his house and is shot dead. Simultaneously, Sarah gives birth to Miles and, as this ping-ponging sequence of events draws to a close, a nurse wipes Miles clean of the remnants of blood left from his mother’s womb.

This scene doesn’t get “The Prodigy” off to a promising start. Writer Jeff Buhler essentially removes any elements of mystery from the film with everything revealed in this sequence of events. Knowing that somehow, someway this killer is connected with Sarah and John’s child, the revelation of strange behavior from Miles (the movie chronicles his growth through a montage focusing on a few odd or disturbing episodes that somehow go unnoticed by his parents) comes as no surprise. Fully expecting a movie with a twist ending, baring the movie’s intentions on its sleeve in the opening scene is refreshing.

As Miles continues to grow, Sarah eventually comes to suspect that he may be gifted. He learns to talk at an unusually early age – somewhere around 20 weeks – and doesn’t cry when receiving his vaccination shots, all of which the doctors assure her is completely normal. Following testing, her assessment of his genius is confirmed but the doctors inform her that Miles’s brain might not be well developed in other areas.

With Miles increasing age comes a more apparent violent aggression – a game of hide and seek with his babysitter, Zoe (Elisa Moolecherry), ends with her foot full of glass and, shortly after, Miles bludgeons a classmate with a wrench. The now eight-year old Miles (Jackson Robert Scott) claims not to remember anything about these episodes afterward, leaving his parents feeling lost. After hearing a recording of what Sarah thinks is Miles talking gibberish in his sleep, Miles’s psychologist, Dr. Elaine Strasser (Paula Boudreau), begins to think something more is going on and asks for help from Dr. Arthur Jacobson (Colm Feore). Dr. Jacobson, whose ideas about Miles’s predicament isn’t initially taken seriously by Sarah or John, proposes that Miles is being possessed by a reincarnated soul determined to finish some unresolved business.

While “The Prodigy” is a run-of-the-mill evil child horror film, its presentation helps to elevate the material. Director Nicholas McCarthy has a good eye and sense of timing for creating suspenseful moments. Take, for example, the game of hide and seek with the babysitter. It’s obvious that something is going to happen to Zoe as she moves down the stairs. Miles has previously been seen unscrewing a lightbulb so it won’t come on when she flicks the switch. As she makes her, clichély slow, descent into the darkness, the camera focuses on her bare feet, slothfully revealing each step as she takes it. Before he toys with the audience too much, avoiding annoyance, McCarthy has the camera suddenly move ahead of her feet to reveal what awaits her on the next step before tracking the camera down to the landing, where she’ll end up. Genre expected jump scares are present throughout, yet jolting the audience with sudden bursts of noise isn’t the aim of the movie.

Scott is capable of playing the full range of Miles’s dual personalities, going back and forth from sweet and innocent to full on psychopathic monster. Schilling and Mooney are fine as the concerned parents, though Mooney takes a back seat to Schilling’s meatier role. As the couple becomes more concerned, and terrified, of their son, Schilling manages to convey a motherly alarm for the health of her child while also showing her unease at being around the disturbed boy. Her confused jumble of emotions becomes most apparent in a scene where she discovers the source for the sudden appearance of flies in the house. As for the rest of the cast, they don’t leave much of an impression, serving to fill roles in which they could easily be exchanged for other actors.

Don’t let the presence of child actor Scott fool you into thinking the filmmakers will hold back. While “The Prodigy” isn’t a blood bath, it is fairly violent at times. Mostly, the violence happens off-screen with McCarthy only allowing viewers to see the pulpy aftermath. There are a few on-screen stabs with a particularly gruesome murder in the finale. Cinematographer Bridger Nielson keeps the movie expectedly dark and drab. When Sarah takes Miles to be evaluated by Dr. Jacobson, his office is lined with dark brown wallpaper and darkly colored furniture. This scene is accented by simplistic, yet effective, scoring from composer Joseph Bishara as the soundtrack focuses on the sound of a ticking metronome, every fourth beat accented by a reverberating low tone.

The majority of the special effects are not very believable. When Sarah catches a quick glimpse of Miles with his face transformed into that of Scarka, the transformation looks too cartoony causing the scene to be ineffective. It is a quick glance, but it is long enough to question whether the filmmakers actually thought it looked believable. The stab wounds also looked like they were handled by a computer and give an artificial appearance to the attacks.

Sarah’s thinking becomes distorted as she suspects she and John are quickly running out of time to save Miles, causing her to make a big assumption (a very questionable leap in logic that will leave some scratching their heads) in her plan to save her child. Ultimately, the film ends as predictably as it begins. What could have been an effective finale is quickly undermined by the inane decision to set up a franchise, using the final moments of the movie to set-up a potential, and unwarranted, sequel.

Although there are missteps, as a whole, McCarthy manages to make the movie work in spite of its predictability. It’s not going to be a classic and it’s not scary, but I did find it engaging and entertaining.
(Review by Bret Oswald)