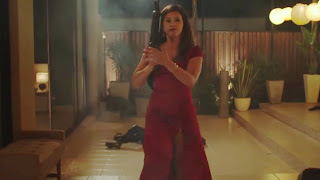 The original Miss Bala received universal acclaim at the 2011 Cannes Film Festival and became Mexico's entry for the Oscars Best Foreign Film. In this Hollywoodized version directed by Catherine Hardwicke (Twilight) and written by Gareth Dunnet-Alcocer is reportedly a little blander aimed at a more commercial audience. Gina Rodriguez of television's Jane the Virgin is the plucky young woman who is caught in the criminal world across the border. It's a typical kind of action adventure movie that one would expect in January. Mindless entertainment to escape the deep freeze.

Gina plays Gloria Fuentes, a aspiring designer working as a make up artist living in Los Angeles. She goes across the border to help her best friend Suzan (Cristina Rodlo) who has entered the Miss Baja pageant. Hitting the party at a local club, she is introduced to the Chief of Police who is the pageant boss and has been known to bed the winners. The club is set upon my a criminal cartel that is out to get the police chief. Panicked Gloria tries to find her friend. She ends up in the hands of the bad guys who blackmail her into working for them in exchange for finding information on her friend. Lino (Ismael Cruz Cordova) is brutal, but kind to Gloria who he gets her involved in a car bombing. He tells her to enter the Miss Baja contest where she escapes, and is picked up by the DEA. They put a bug in the phone that Lino gave her to keep track of where they are while promising to help her find her friend. Now playing both sides, Lino has her made a run across the border with cash taped to her body and in secret compartments under her car in exchange for drugs. She tells the DEA where the the rendezvous will take place and a shootout occurs. The DEA fails to help her escape, and when Lino gets injured she helps him to safety. They take her to their hideout, where Lino teaches her how to shoot and automatic. Lino treats her well, talking about his life in Bakersfield. Of course his blue eyes are captivating, and Gloria is somewhat lulled by his kindness. He tells her of the plan to eliminate the police chief who is his main adversary and part of a criminal cartel. Her friend may be part of his human trafficking business. They only way they can get close to him is for her to win the Miss Baja contest and get her to lure the creepy old man into his bedroom.

There are plenty of shootouts, explosions, and executions. Gloria is forced to be resourceful to survive at all costs. The last act is Gloria taking control of a really bad situation. Gina Rodriquez manages to make her Gloria into a believable heroine despite the unbelievable situations. She soldiers on no matter what happens and bodies fall around her. Hardwicke tries to make Lino sympathetic like blood sucking vampires in Twilight, but it's just a distraction for his cold blooded killer nature. This is a typical kind of action adventure movie that one would expect in January. Mindless entertainment to escape the deep freeze.
(Review by reesa)

Posted by Dallas Movie Screenings at 9:57 AM