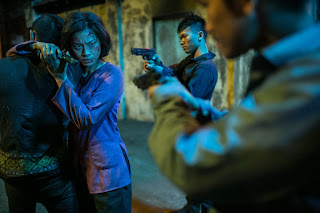 There is a story told in the middle of this film about never messing with a tiger mother defending her cubs. This case in point blows out all the other revenge type films created in the US with pretty and slick actresses or older actors who possess a "a certain set of skills". Veronica Ngo who also produced Furie plays a single mom living in a small village as a debt collector due to her gangster past. Le Van Kiet, who is from Vietnam but grew up in California and is a graduate of UCLA’s School of Film and Television fills the screen with some intense and emotional scenes as Hai Phuong goes in search of her 10 year old daughter who is abducted by a human trafficking gang who sell the children for their organs.

Veronica Ngo (“Crouching Tiger, Hidden Dragon: Sword of Destiny” and as Paige Tico in “Star Wars: The Last Jedi”) was the number one female action star in Vietnam after her leading role in Clash. As Hai Phuong she supports her daughter collecting debts for a loan shark. Her job causes Mai(Mai Cat Vi) to be bullied by her classmates and humiliation from the villagers. She suggests to her mom that they should start a fish farm as she notices the bruises on her mom's hands after her day on the job. One day after having an argument with her mom, Mai is kidnapped while sitting by the river. Phuong sees the abductors and gives chase. From this moment on the actions is pretty much non stop. Chasing their boat from a stolen motorcycle, then jumping on the back of a truck heading to Saigon. She tries to use her old connections when she worked at a hostess bar before she found herself pregnant. She goes to the police where she finds a wall of missing children. Stealing some of the information from the desk, she tracks down one of the bad guys. The main detective Luong (Phan Thanh Nhiên) finally catches up with her in the wake of her confrontations with he bad guys. He tells her it's an international operation that they are close to breaking. Phuong is single minded in her mission to find her daughter. Realizing she knows the number of the train that the bad guys are transporting the children, he helps her as she works her way through the bad guys on the train.

The future of Asian martial-arts movies just may well be female. The mano-a-mano beat down between Phuong and the female gang leader choreographed by stunt coordinator Kefi Abrikh is truly outstanding. There's no slo-mo shots and those hits looks like it hurts. Veronica Ngo sensitively portrays the tough mom who regrets breaking off with her family during her willful and rebellious youth, while now having to live with the consequences. Her daughter was her savior from her previous lifestyle. As she says to her nemesis, "I may be in the wrong place, but you took the wrong Kid". She is the mother tiger.
(Review by reesa)