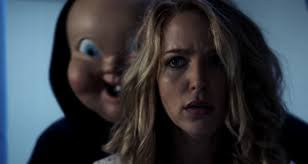 “Happy Death Day,” a pleasant surprise when it was released in 2017, twisted the slasher formula by combining it with science-fiction and sprinkling in a dash of humor. Following its success, a sequel was inevitable (director Christopher Landon says a trilogy is planned though you can see them keeping this up for multiple sequels if they remain profitable). “Happy Death Day 2U” fleshes out the world more than we saw in the original movie, finally revealing the how and why Tree, short for Theresa, got stuck in the time loop.

The sequel opens with Ryan (Phi Vu) waking up in his car and returning to his dorm room to find Tree (Jessica Rothe) and Carter (Israel Broussard) in bed. After quickly leaving the room, he’s called by one of his lab partner’s Samar (Suraj Sharma), who tells him to come to the lab. The group – Ryan, Samar, and Dre (Sarah Yarkin) – have been working on a device as part of their thesis project. They aren’t quite sure what the device does, but I’m sure you can guess. Soon, the dean (Steve Zissis) is barging into the room with some security guards confiscating the machine. As Ryan sits upset over the loss of his project, he begins receiving text messages that include pictures of himself. Using the pictures as a guide, he winds up in a lab where he is promptly murdered by the baby-face wearing masked killer and then awakens again in his car to repeat the day.

Writer / director Christopher Landon gives the impression that the film is going to start going in a different direction by focusing on a character who didn’t get much screen time in the previous movie. But what seems like a new approach is quickly dropped, leaving one to wonder why it was even brought up (though it could be addressed in the planned third movie). One thing leads to another, and the group find themselves face to face with Ryan’s killer, who then activates the machine, sending Tree back into her time loop. Once again stuck on her birthday, Tree goes on a rampage across campus. If you haven’t seen the original, don’t go see this one until you do (a quick recap is included but will spoil some of the fun of the original).

On the surface, everything seems the same as it did the last eleven times she lived through this day but as she rushes across campus to confront her murderous roommate Lori (Ruby Modine), Tree begins to notice differences. Lori isn’t where Tree is expecting her to be and she doesn’t know anything about the poisoned cupcake she previously gave Tree. Further confusing things, uppity sorority sister Danielle (Rachel Matthews) is nice to Ryan and is dating Carter, causing Tree to realize that she’s in an alternate reality. No longer sure of people’s personalities or their motivations, Tree finds herself having to find the new killer and a new way to break the cycle.

Jessica Rothe is again fantastic in the lead role. Her range is on full display as she captures the anger of someone realizing things have just taken a significant turn for the worse and, in the film’s more tender moments, as she relays her feelings for other characters including an emotional reunion with her mother – who isn’t dead in this reality. The rest of the cast is fine but Rothe outplays everyone else.

“Happy Death Day 2U” is well made from a production stand point, the photography looks great, the effects are believable, and the score works, yet, it isn’t able to match the energy and rhythm of the original movie. This time Landon decides to focus the movie more on the comedic and sci-fi elements. As previously mentioned, the included exposition attempting to explain the time loop causes scenes to grind to a halt and make the movie feel longer than it should.

Topping something as unique feeling as the original (even if the basic premise was taken from a 20-year-old comedy) was going to be a difficult job. While “Happy Death Day 2U” lacks the bite and wit of its predecessor, it’s still a fairly fun movie
(Review by Bret Oswald)