How to Train Your Dragon: Hidden World 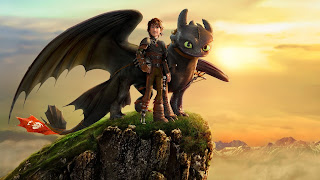 Review: How to Train Your Dragon: The Hidden World


How to Train Your Dragon: The Hidden World comes to a warm, cozy conclusion for both Hiccup and Toothless. The third and final film is a bucket of adventure, emotion, and a bit of a romance along the way. DreamWorks Animation delivers a second sequel that takes you on the last dragon ride to where a nice quiet place comes and goes for their journey to meet its end. The things that we see that are good, must come to an end.

DreamWorks Animation have suffered the downfall throughout the years but The Hidden World really bounced the studio back after years of box-office downfalls on the films and the acquisition from Universal Studios. Dean DeBlois return to the director’s chair to helm this final sequel of the How to Train Your Dragon series.

In this sequel, picking up just about a year How to Train your Dragon 2 left off, Hiccup (voiced by Jay Baruchel) and his dragon, Toothless, searching for the safest place for his dragon all the other dragons from his fellow dragon riders. Though during their plans to do so, Toothless encountered a female light-fury dragon.

The film brings the return of the actors Jay Baruchel, Cate Blanchett, America Ferrera, Christopher Mintz-Plasse, Craig Ferguson, Kristen Wiig, and Gerard Butler to record their final moments for their final film respectively onscreen while newcomers F. Murray Abraham and Justin Rupple step in for their roles of the villainess Grimmel the Grisly and Tuffnut Thorston (with the latter replacing T.J. Miller).

Director Dean DeBlois has built some strong relationships between Hiccup and Toothless. They are meaningful, brave, and encouraging to keep their home, the dragon riders, and the dragons from being destroyed from antagonists from all three films. Their chemistry never dies down when it comes to forming a friendship and fighting for peace and freedom. Though animal/dragon freedom plays the signature dynamic for the film. The freedom of the dragon(s) proves to be the most difficult challenge ever of the film and to the human characters.

Producers Bonnie Arnold (Toy Story, Tarzan, How to Train Your Dragon) and Brad Lewis (Ratatouille, Cars 2, Storks) really fit the bill on assisting the director and the cast and crew for making this possible for The Hidden World. Also, what’s more nicer is the music produced by composer John Powell who return to create a nice, emotional music piece that makes the beginning and the ending more fitting.

However, I dislike the personality traits of the villain Grimmel the Grisly as the director made the character more boring, darker, but weaker as well as the battle between Hiccup and Grimmel that makes the battle somewhat confusing. Having a weak villain doesn’t seem to be entertaining when it comes to making any battle scenes more dramatic and cunning. I somewhat did not enjoy small bits of the first half of the film.

Not only DeBlois, but DreamWorks Animation co-founder Jeffrey Katzenberg announced the idea of The Hidden World while using his leadership talents to supervise the studio. His leadership led the studio to create such beloved movie-to-be-franchises Shrek, Madagascar, Kung Fu Panda, and How to Train Your Dragon. Before co-founding DreamWorks Animation, Katzenberg has previously worked at Disney Animation Studios where he was involved in four of Disney’s biggest hits The Little Mermaid, Beauty and the Beast, Aladdin, and The Lion King as the studio’s chairman and supervisor until 1994 when he stepped down the position.

To conclude this review, How to Train Your Dragon: The Hidden World is a great film to watch. The fans of How to Train Your Dragon will find the ending perfectly to conclude the franchise. To those who haven’t seen the first two films, you will be mystified of seeing this so don’t jump to conclusions when you’re ready to watch The Hidden World. To me, it’s great movie, but doesn’t add up the expectations from the film like the first two films. It is anticipating film but with small downfalls in the way. I love it but I am waiting and rooting for Pixar’s Toy Story 4 and Avengers: Endgame. Running time: 104 minutes

Email ThisBlogThis!Share to TwitterShare to FacebookShare to Pinterest
Labels: Henry Pham, How to Train Your Dragon: HIdden World