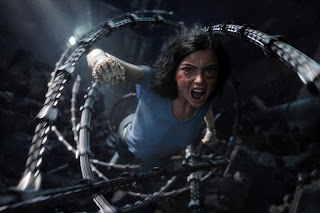 “Alita: Battle Angel” has had an interesting life. It was supposed to come out in August of 2018. The powers that be over at 20th Century Fox delayed it until December of 2018, just in time for the holiday Christmas rush, but to no avail.

It finally came out on February 14 but with no big boom or degree of excitement or fanfare of any kind whatsoever. Sure, “Alita: Battle Angel” opened in the No. 1 spot, but with a number even under 30 million, the 28-plus initial gross was less than stellar. It actually had one of the worst President’s Day weekends in the past 15 years.

Now, the pluses outweigh the negatives in this James Cameron produced tale of a Robert Rodriguez film. This

little excision is probably the biggest budgeted film Rodriguez has ever worked on. What works well here is the 3-D visuals that accompany this journey. Cameron to me is the only one who has a firm grasp on the medium.

Like his well-written Kathryn Bigelow-directed tale “Strange Days,” (1995) he knows how and where to move the story along. That is what he does in the storytelling tale of “Alita: Battle Angel. He essentially sets op a story with the chance and idea of further chapters.

Both Cameron and Rodriguez know where the characters and story are heading, since the dramatic scenes pause for an action set piece that is woven into the story for just the right degree.

Like the Luc Besson directed 2017’s “Valerian and the City of a Thousand Planets,” “Alita: Battle Angel” landed with a giant thud accompanied with a “Ker-plat! as well.

Too bad, since I would have liked to see what happens to all the denizens of this futuristic society wherein a “Rollerball”-like game is the end all be all way to win in this complex and intriguing tale.

Lead Rosa Salazar exudes the right degree of naiveté as the lead character of Alia. She knows what she needs and wants in the world. Her part was done with what essentially is motion capture technology. It has-progressed immensely since the days of the so-so "Sky Captain and the World of Tomorrow" in the late 2000's (2004) to be exact.

Aiding Alita in her journey is Christoph Waltz’s Dr. Joseph Ido, who once had a younger daughter that fell ill to the outside world around her. Also woven into the story is Jennifer Connelly’s Chiren. Ido’s ex who still hangs around for further interaction.

Filling out the antagonist role is Mahersheli Ali’s Vector, a heavy in the game for his own self-serving interests. At various stages in the movie, his eyes glisten with a bright blue hue, a character dynamic mentioned only briefly in passing.

Part of the story also involves Alita becoming a bounty hunter for hire, so she can repay the debt she feels shew owes to Dr. Ido. Like Joss Whedon’s awesome “Serenity” (2005), the nomenclature and dialogue utters word phrases that become commonplace later on.

When it comes down to it, this one is a must see for the big screen. “Alita: Battle Angel” contains 3-D visuals that actually work within the structure of the story, so the extra money for the upgrades is worth it.