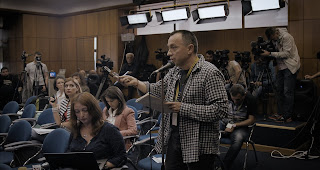 Just to let the viewers know that this documentary is arguably hard to watch, especially for young teens, so before you watch this, you might want to be careful and take proper precautions on viewing this film in theaters or on digital.

Collective (Romanian: Colectiv) is the documentary film that revolves the group of investigating journalists at the Romanian newspaper organization in their mission to find out about the uncovering assignment of the ongoing public healthcare fraud, political and power corruptions, and maladministration. Shot in a rigorously observational manner, Collective covers an event that took the country of Eastern Europe by storm and led to massive big pharma, powerful predicaments, and government reform. This feature is directed, written, and produced by Alexander Nanau.

Director Alexander Nanau and his crew have put together on crafting this subtle documentary feature that features power and politics for the main dynamics of the film. Nanau also uses people’s powerful voices while on camera to express how things can be done in different situations. Nanau, along with the crew, knows how anyone who dealt with these dilemmas really shows how corrupt a health system can be hard to solve and what are the implications on a national level.

The nice, soft cinematography in this film is absolutely stunning; the camera team uses dimly lit to make the story and the voices of people more advisable for viewers as well as using the low contrast scenes that drive the people home in the intensity of the incident. Additionally, the harshly closeups in telling the story of the people that Collective follows really adds a satisfying taste for that affair. Even the lack of ambient noise filtration in press conferences helps the viewer really jump into the story and the film as a whole. Aside from the storylines and the plot itself, the entire crew really knew how to truly make a stunning documentary film in a trendy way.

Overall, Collective is a very good film, maybe the best by their top of their levels. This film is a must and is highly recommended to those in the ages 12 to 18, plus adults. It really brings some good, moral lessons about freedom of speech and government power to both kids and adults. The director and the documentary crew really did it. Hopefully this film would stand a chance to be one of the Oscar contenders for Best Documentary Film. Though, I do warn that there’s some political elements being used in this film as well as scary graphic scenes that you should be aware of given the fact that this film runs nearly 110 minutes to see more action being witnessed in every scene. With that, Collective successfully calls viewers to action to speak out against power and corruption.