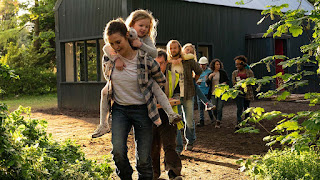 Herself is the key of life’s greatest humanistic choice!

Movies can be extremely difficult to choose which drama film to see without having the sharks all over the place out of fear or concern. In that case, family relationships carry the main signature theme to drama films that dramatized the audiences and families who dealt with issues in certain levels. English filmmaker Phyllida Lloyd, who helmed Mamma Mia! and The Iron Lady which both films feature Meryl Streep, returns to her directing duties in thus most recent feature film, Herself, featuring the stars of Clare Dunne in her leading role, along with Harriet Walter and Conleth Hill.

Herself follows the story of a young mother Sandra who struggles with her daughters after escaping from her abusive husband. She later fights back against a broken housing system when she sets out to build her own home and in the process rebuilds her life and rediscovers herself.

The entire cast consists of English and Irish actors, which perfectly fits for a Downton Abbey-flavored drama movie outing. Clare Dunne (Spider-Man: Far From Home) leads the big screen as Sandra, the mother of her two daughters named Molly and Emma (both portrayed by Molly McCann and Ruby Rose O’Hara). English actress Harriet Walter (Downton Abbey) portrays Peggy in the film who helps Sandra build her a new home while Irish actor Conleth Hill (Game of Thrones) shares some screentime with them as Aido, the construction worker.

Lloyd’s direction over the course of the film exemplifies what a film can do to send the rightful messages to women, especially teaching them how to voice one’s opinions with honesty and bravery. Lloyd really teaches Dunne on how to better herself in many ways to free herself as if any woman would accept or reject something from a friend or family or sprouse. Even with guidance Lloyd offers to her, Dunne knows onscreen on how to follow her character nicely and slow without beating around the bush.

The director, the producers, the cast, and the film also retrace the cultural themes of domestic violence and abuse, the film’s main structure component, as well as the #MeToo movement after the allegations of sexual abuse towards women from powerful men and leaders in the media industries which gives the film a similar, powerful feel that left the audience to think about those situations and predicaments from past to present, dawn til dusk.

Though parts of the film that prevent me from enjoying the film are the darker scenes involving Sandra’s relationship with her abusive husband, which may frighten young viewers upon seeing this, as well as her darkest memories about him, giving her a PTSD shark in her weary world. Nevertheless, a darker, sardonic tone and stride are present throughout her character’s viewing of the world. Life should be a place to just enjoy oneself regardless of the events that occur.

Over the top, Herself is a good film, but I would like to see further incarnations of this tale. It runs about 97 minutes for the full length of time and I have to say, this film is a must, but you might want to take proper precautions before you decide to select this film, digitally or theatrically.

Email ThisBlogThis!Share to TwitterShare to FacebookShare to Pinterest
Labels: Henry Pham, Herself review