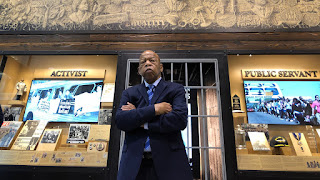 Back when television was a young medium that had advanced throughout the years since the introduction of television in the 1950s and 60s, it was the biggest opportunity to show the entire world about what was going on in the world daily, leaving the movie industries coiling down the drain.

John Lewis: Good Trouble is another documentary the director Dawn Porter has offered this year after handling directing duties of Gideon’s Army and Trapped, both of which are also documentary films. This film explores John Lewis' actions towards the civil rights movement, voting rights, gun control, health care reform, and immigration. Porter also provides some footage and interviews on Lewis’ childhood experiences, his inspiring family, and his fateful meeting with Dr. Martin Luther King Jr. in 1957 to discuss how his actions and experiences inspire people to take action on those governmental situations. Coincidentally, this film was released just weeks before Lewis’ death in July 2020.

Under the direction of Porter herself solely, Porter and her team have used a plethora of archive footage and interviews of John Lewis and his entire life from the start-up as a farmer and a student to the most inspirational civil rights activists in America. Porter wanted to make a film about any motivation speaker who wanted to make a difference in the world. In this case John Lewis who wanted to make a difference for racial justice in the white people’s territory. His ways and marches in nonviolence and commitment to the cause have continued for 65 years.

With the story, the organization of plot-creating ideas, and the cinematography coming out steadily, John Lewis: Good Trouble isn’t just a simple documentary film for that genre. It is also a wondrous memoir that weaves an important story about an exceptional man, bringing justice and showing us our history from the '60s to today. Both Porter and John Lewis really nailed down the story and lecture that are easily manageable for both kids and adults as if they are in a classroom to study history.

With the satisfying ingredients being used, John Lewis: Good Trouble is the wonderful documentary film. It clocks about 96 minutes. The director and her cracking documentary filming team made it all possible to learn about an effective leader and his ability to understand the harsher times we are currently living through, from the 1960’s to present. This film is a must for both kids and adults, and also history teachers as well, to remember all that has transpired throughout the years during childhood and young adulthood as we grow up during these difficult times. The film is now up on digital on HBO Max and Amazon.