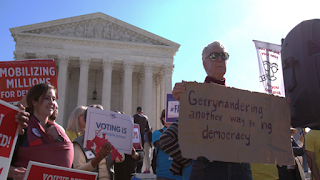 Gerrymandering is a practice where politicians or powerful government officials have increased their political power in the party. It’s a form of manipulation of the boundaries of electoral constituencies so as to favor one party of class and weaken the other class.

Just letting the readers know that this is a film with many political topics and answers being used, so if you’re planning on seeing this, might as well take proper precautions on that. Slay the Dragon is simply a documentary film about gerrymandering in the United States, directed by Barak Goodman and Chris Durrance. This film is made under the production company called Participant. The directing duo really defines how gerrymandering could influence predominantly on elections and discusses the sway of outcomes for gerrymandering that has become a hot-button political topic and symbol for everything that can be easily broken in the American electoral process.

Slay the Dragon follows the story of a young woman, Katie Fahey living in Michigan, who desperately wanted to make a change by rallying a group together to create a glowing proposition that prevents the acts of gerrymandering happening in Michigan. Katie Fahey is an American activist who founded the organization called Voters Not Politicians and has led a plethora of successful grassroots campaigns to ban partisan gerrymandering in Michigan

. Having been handling experiences and duties on documentary films about politics and American government from Barak Goodman and Chris Durrance, the duo construct a time-organizing plot for a list of archive footage and interviews about the ways of gerrymandering filling into each scene and climax. The duo and the team also utilized a team of politicians and journalists in order for the viewers to follow what the events and actions take place during the time. Goodman and Durrance not only bring down the lectures, but to make this film more like one's own educational historical textbook for students and teachers to study on how this could affect the future elections and law-publishing rules and regulations.

Over the top, Slay the Dragon is okay. It’s an educational film that allowed me to learn more about gerrymandering. As someone who enjoys politics and social justice, I had an interesting experience learning about that. Though, the only thing I do not like about this film is that it didn't fully capture my attention entirely. In my honest opinion, this is one of most difficult documentary films to watch. I understand that it is difficult to make a documentary of this nature, but I respect the hard work and effort from the directors to put into making this film. I did learn a lot about this and feel inspired and reassured, so the filmmakers could do something to accomplish their achievement.