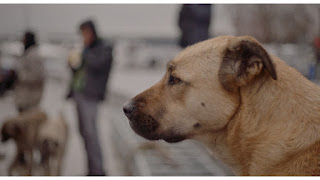 You’ve probably heard or been familiar with Disney’s Lady and the Tramp, A Dog’s Purpose, A Dog’s Journey, or mainly The Secret Life of Pets, but here’s another doggie-dog adventure called Stray. Stray is such a beautiful film coming from director and writer Elizabeth Lo who introduces the audience to a dog named Zeytin, a simple and stray dog who is living life to the fullest on the streets of Istanbul. This film serves as a directorial debut for Elizabeth Lo who had a history of directing documentary shorts and now moving on to the big screen by helming Stray, Lo offers a story that even tells the tales about how an ordinary dog has his day in Istanbul just as any dog in America or other countries could have a wonderful life with purpose and fulfillment.

Under the direction of Lo herself, Stray is filmed across Istanbul and parts of Turkey. Lo shows the hardships of life with Zeytin in the eyes of the city along with other dogs who share their purposes with Zeytin. Lo not only focuses heavily on Zeytin, but also focuses on other stray dogs and their adventures shown in the film and throughout rather than facing the camera towards humans and Sybrian refugees. It feels like Lo wants to pay towards attention to the dogs and focus less on humans present with less dialogue. Lo, along with her documentary teams, really want to capture the hard lives of a stray dog or any other pet that would end up in the streets, looking for something interesting to happen. This darkening purpose and fulfillment are where Zeytin’s climaxes become more and more cinematically interesting as the story is manageable to follow closely.

The documentary and the cinematography teams did a great job of handling the camera angles towards the dogs and their adventures on what comes next scene after scene. They really bring up a good theme of poor living poverty based on how different countries have faced as well as cultures of indifference and the animals’ way of life, which becomes clever and precise for that tone. Though, one of the biggest downfalls is that lack of color and happier brightness as the team didn’t put much effort on the settings and locations to see. And lastly, the score from Ali Helnwein is smooth and very majestic like the sounds of Hildur Guðnadóttir’s Joker musical composition. It really adds a nice tone of structure to have for Zeytin and other stray dogs’ scenes for that affair.

Overall, Stray is a good 70-minute, I wish I can see a lot more action and adventure coming from Zeytin and other dogs embarking their adventures through the city. Lo and the team really crack the nail of producing this high-end doggy-tail documentary movie that will make the people scream and bark for more. This is a must for all dog lovers out there and I can personally guarantee that this will help learn more about dogs and their high-flying journeys. It felt like I was watching a documentary version of A Dog’s Purpose and A Dog’s Journey.