Catch The Fair One 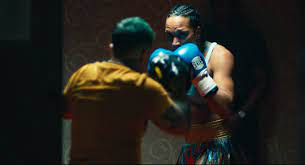 Catch The Fair One is a simple task I asked for.

Catch The Fair One, written and directed by Josef Kubota Wladyka, is a simple drama-thriller film that focuses on the former championship boxer who puts her boxing career on hold and embarks on her journey of her lifetime to search for her missing sister, filled with darkness and drama hanging all over her head.

Real-life professional boxer Kali Reis (in her first acting debut) portrays her role as Kaylee. In the film, as an actress, Reis shows her disdain and muster with her family-character trait as she touts her superiority in the history of her life and trauma. Likewise, the more she is willing to find out about her missing sister, the more determined she is willing to put her own dear life at risk.

Under Wladyka’s directorial roots, he makes the story excel smoothly with some nice soft consistency on Kaylee’s building-up stronger character traits being delivered in the first half of the film. With that, all the pieces are in place, but there are some certain gravitas that are missing with said execution of all the dynamics within. It's a bleak-movie being shot and filmed in the dead of winter somewhere in a northeast city, yet the cold season matches the cold stamina of heartless men, featured in the film, who have no heart and soul just to treat any trafficking woman as business. It’s something Wladyka and Kali Reis knew and related to any heartless people, like media people in reality, who can do whatever they want and can do nothing but capture, photograph, advertise, and sell them for their own sick amusement. But hey, business is business you know.

Though the film positively excels the story and the focal camera movements for Kaylee character, parts of the film, however, lack most of the colors and artificial textures due to overcommitting on the violence and the dark-level, intense dialogue provided by Wladyka. There’s even a lot of blood and strong language shown in the film just to advance the R-rated atmosphere for many critics and audiences to see through the supportive characters’ “racial” personas.

Thanks to the brilliant acting, and wonderful story director Josef Kubota Wladyka has offered, Catch The Fair One is alright, but it’s a nice 85-minute movie right there. I know it’s just a drama-thriller feature film with nothing special or exciting to happen, but this is a film where one can enlighten (or simply fluctuate) other people’s spirits, no matter what the costs or how emotional it gets. It’s a small price other people are willing to pay as you are planning on seeing this film. Be forewarned, it’s a tough movie to watch with lots of bloody scenes and some bad language being inserted to add melodrama to it.

Email ThisBlogThis!Share to TwitterShare to FacebookShare to Pinterest
Labels: Catch The Fair One review, Henry Pham