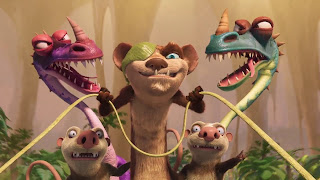 The Ice Age Adventures of Buck Wild flaws and thaws!

The Ice Age films haven't been so good since the third installment, which came out in 2009, have suffered critical decline despite the box office success compared to the franchises of Despicable Me and Shrek, or even Pirates of the Caribbean to go along with that. This is the first Ice Age film without the involvement of Blue Sky Studios due to the studio’s closure made by Disney in response to COVID-19, canceling several studio projects permanently. Despite this, the production of Ice Age: Adventures of Buck Wild has continued forward with some studio filmmakers getting back on their feet and a newer voice-acting cast being hired. Having been directed by John C. Dorkin, the film features the returning star of Simon Pegg.

The Ice Age Adventures of Buck Wild picks up where Collision Course left off and focuses on two possum brothers, Crash and Eddie, who set out to find a place of their own. Together with the one-eyed weasel, Buck Wild, they will face the adventure and danger of the dinosaur world.

Actor Simon Pegg is the only returning voice actor from the previous films, reprising his role as Buck Wild. There is nothing replaceable than Simon Pegg himself as he hilariously enjoys voicing his character and he is certainly having the time of his life. He is what everyone’s looking forward to about this film and is what makes this film exciting to see for some Simon Pegg fans out there.

Under the direction orchestrated by John C. Donkin (in his directorial debut), the film’s plot feels empty and unemotional as nothing new and nothing too great to look forward to. The story is terrible and is completely hurt and abused by its inaccuracies being uplifted by the predictable, logical statics. The animation is extremely terrible, lazy, and cheap as well. Even lots of dialogues, coming from the screenplay team of Jim Hecht, Ray DeLaurentis, and William Schifrin, aren’t helping to save the mess but they are something important to when choosing the right vessel of finding one's own life and purpose. Afterall, it can be a predictable film but with a good emotional quotient at the end. My main guess is that character emotion is presented as the main focal point of the story, everything else, not so much. Regardless, the filmmakers really pulled it off a decent script with a family-driven formula of the weak-looking characters.

The film also includes the returning characters of Manny, Sid, Diego and Ellie, but are given as supportive characters and newer voice cast. The voice cast is less alright but it’s sad to see that most of the actors did not return to reprise their roles. Instead, a cast of newer voice actors are hired to take over the roles, which ruins the franchise’s motto and the childhood nostalgia of those who grew up with the first Ice Age film, which is one of those animation gems that impact computer animation along with the first films of Shrek and Toy Story. On the other hand, the visuals are good.

So hard to say, but The Ice Age Adventures of Buck Wild is a terrible 82-minute movie and I hate it more than anyone else in the world. I think Ice Age should have stopped the franchise, maybe at least after the third film in the series. Simon Pegg did a great job, but for director John C. Donkin, I can sense he really wanted to make this film a decent Pixar-brand film and I respect him for that, but this cheesy-choppy animated film has prevented me from liking this film. I have witnessed every flaw and every lazy writing the filmmakers and animators have put just to make this film hilarious and entertaining. If Disney revives or hasn’t canceled Blue Sky Studios, then the studio and its employees would have turned their heads to creative, original projects (and not the Ice Age films) to work on coming from any film directors or animators who want to share their voices and offer something nice and gentle in that order. The film is up on Disney+.

Posted by Dallas Movie Screenings at 10:26 AM