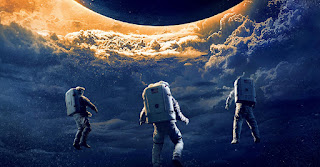 I must confess on the outset, I am a Roland Emmerich fan. I know lots of people liked his "Independence Day" picture in the mid to late 90's, but I was not a part of the masses. With me, you have to go back to one of his earlier pictures titled "Moon 44," a low-budget science fiction actioner with one of my favorite actors as a kid, Michael Pare.

Then, with that success, Emmerich turned around and did one of the biggest busts with his rendition of "Godzilla," but that is another story not suited for this broadcast. Now comes "Moonfall," another big budgeted tale wherein the moon falls off of its axis and decides to thwart anything coming its way to prevent total destruction. Patrick Wilson ("Watchmen," "The Conjuring") and Oscar winner Halle Berry (“Monster’s Ball) headline this engaging tale that is no Shakespeare (ironically, Emmeerich helmed his non disaster movie, "Anonymous" in 2011. It tried to prove that The Bard did not write all of the classics that he is known for, rather it was Edward De Vere, Earl of Oxford who penned all of his work.

Regardless, it was a very dry and uninvolving flick. I think I gave it a grade F a C- when I originally watched it.

Now, back to "Moonfall" with the duo of Berry and Wilson, the pair share great chemistry with each other. They also have another person in the party with John Bradley. For those with a keen eye, he appeared on HBO's "Game of Thrones" as Samwell Tarly from 2011-2019.

Also involved with "Moonfall" is Donald Sutherland. Like his brief scenes in Ron Howard's "Backdraft," his part is just use as mere filler to pad the run time and give pointless advice.

Looking back at what he is doing next, it looks like Emmerich is going back and returning to something he has done before. From my sources, it looks like he is going to take another poke at "Stargate," (1994). It was a decent enough flick, so I am interested in seeing what he can do with all the advancements they have made in technology through the years.

I also liked what he did with his low budget entry “Moon 44” in 1990, It had leading man actor, Pare in the hero role, a part he executed so well with “Eddie and the Cruisers” and Walter Hill’s odd concoction of the musical gangster tale “Streets of Fire” in 1984. It is one of the few musicals I actually enjoy, with part of that being attributed to co-star Diane Lane, one of my childhood crushes from 1983’s Francis Ford Coppola-directed “The Outsiders.”

Although "Moonfall" is not a bad movie, it just kind of sits in the "meh" category. I'm glad I watched it in the theatre, because it is a different experience altogether. Everything done in “Moonfall” is kind of what Emmerich wanted to do with the aforementiomned “Moon 44” all those years ago. He had a bigger budget, so if was able to up the ante in the visual effects department.