I Want You Back 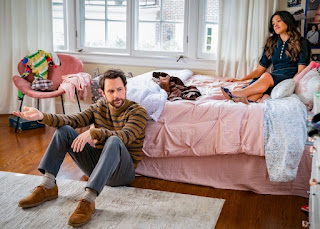 Amazon’s I Want You Back became a lovable duo for Jenny Slate and Charlie Day!

The film and its atmosphere reminds me of that television show called New Girl, featuring Zooey Deschanel and Jake Johnson. Let me say this, going through tougher break-ups is extremely hard lots of people have been dealing with. People often ask if relationships do tend to last long, some say they do while others say they don’t. But fear not, people moving on with their lives might be a good thing just to focus on something important or maybe it’s for the best. Director Jason Orley offers a wacky, romantic tale lots of couples will never forget, featuring the main duo of Charlie Day and Jenny Slate.

I Want You Back centers on two heartbroken strangers Peter and Emma who are in their thirty-something age each being dumped by their respective love ones. Unwilling to get over their past breakups as well as moving on with their lives, the two form an unlikely alliance to win their exes back by destroying their new relationships and return to the way they should be before the breakup.

Actress Jenny Slate (Parks and Recreation) mainly portrays Emma, a receptionist for an orthodontist, who have been dumped by her [now] ex-boyfriend Noah while actor Charlie Day (It’s Always Sunny in Philadelphia) receives his main role as Peter, an employee who works at the network of retirement homes just three floors down at the same building as Emma’s, who is recently been dumped by his ex-girlfriend Anne. Charlie Day and Jenny Slate really nailed their acting roles down as they both knew what it was like to be in a romantic movie. They understand that relationships can be quite painful to come by and that being alone is mentally a fear for everyone else, especially to those who are currently single.

Filmmaker Jason Orley embarks his journey as director of the film. He’s like studying other people’s emotions and questions about what it was like to be dumped by their loved one. He truly understands how past mental relationships and breakups can be taken seriously to the next level. Based on how he operates Day and Slate on camera, he demonstrates that winning back a loved one at first seems like a very cool idea, but at the end, they both discover that finding a new relationship with each other is what makes it better and happier. That’s where the director calls the shots on the “boy meets girl, boy loses girl, boy gets the girl” melodrama phrase. The director even adds a small slew of romantic movie references right there and the film’s climax rarely strays from its genre’s conventions.

Thanks to the screenwriting crackpots from Isaac Aptaker and Elizabeth Berger (This is Us), I Want You Back is an earnest story about one’s own audacious destiny on pursuing lost love of one’s life. The narrative cruises satisfyingly throughout the first half while the comedy and the some laugh-out-loud moments really go down easily. The chemistry between Charlie Day and Jenny Slate is superb and nicely done to follow, which is what makes this film full of glee and very fascinating. Their chemistry gives a secret idea that they should stick with themselves rather than going back to their loved ones. Even the characters, including the supportive ones, grow in certain ways, but it’s a price tag anyone is willing to pay. It certainly really gives me the New Girl vibes if you put it this way.

While the story is fun to look upon, some scenes are really challenging (and unemotional) to watch as there are lots of drugs and sexual contents being shown in the film, taken much higher account of an R-Rated romantic-comedy movie. The pacing is gritty and dry while the ending is too cheesy and hard to follow. The last act of the film is charmless and is filled with heartbreaking moments that left me a bit confused as the final story act didn’t provide much legitimate details on how the romantic movie genre follows, especially on that wedding scene. My instinct is that Orley, Isaac Aptaker, and Elizabeth Berger have made a sharp turn on bitter relationship battles on the film’s end.

Despite the film crew’s valiant efforts, Amazon Studios’ I Want You Back is an okay-but average movie, clocking in at 110 minutes. The director and the screenwriters have done a terrific job, though some parts of the film (including the ending) really need more work and effort in order to create a simple romantic movie without messing things up. On the flip side, Day, Slate, and the rest of the supportive cast mentioned really fit the bill. This film would go great for a Valentine's Day treat if you’re planning on watching this as a date. Though be warned, this movie is not meant for young teenagers, only the older ones and young adults due to the amount of R-Rated exposures present in some scenes. So, if you're planning on seeing this, I highly advise you to be aware of them, both mentally, spiritually, and physically. It’s a fun movie, but with messy-emotionless plot holes down the line.

Email ThisBlogThis!Share to TwitterShare to FacebookShare to Pinterest
Labels: Henry Pham, I Want You Back review