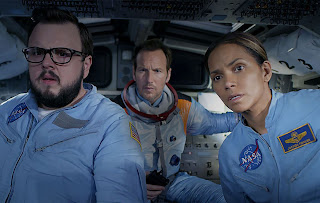 Film director Roland Emmerich (aka the “Master of Disaster'') is known for producing and directing science fiction and disaster films, but his directorial-led films receive lots of criticism from fans and critics due to historical inaccuracies, illogical plot twists, and off-topic narratives. Nevertheless, some of his films have achieved enormous box office successes. And even though most of his films are hard to please, he is still determined to make a film as entertaining as ever because all he wants to do in his life is to make movies just for fun. The film features the cast members of Halle Berry, Patrick Wilson, and John Bradley.

In Moonfall, a mysterious force knocks the Moon from its orbit around Earth and sends it hurdling on a collision course with Earth. With the world on the verge of annihilation, NASA executive and former astronaut Jo Fowler is convinced she has the key to saving us all, but the problem is one astronaut named Brian Harper and a conspiracy theorist named K.C. Houseman are the only ones who believe her. Together, all three must learn how to prevent this terrible disaster and save humanity from the impending doom.

Oscar-winning actress Halle Berry (Monster’s Ball) receives her protagonist role as Jo Fowler, a former astronaut, who believes that the world is in jeopardy of collision course while actor Patrick Wilson appears on her side as astronaut Brian Harper. Berry and Wilson make a great acting duo and team together and they seem like they touched each other’s hearts and hands on the inside for that chemistry. These two actors are what makes this film nicely enjoyable and very easy to see. Let’s not forget actor John Bradley (Game of Thrones) right there, he’s the Jurassic Park’s Ian Malcolm character, giving supportive advice to them.

Learning some keynotes from several other sci-fi directors like Michael Bay, James Cameron, Ridley Scott, and the Russo brothers, Emmerich is calling out the shots right here. He basically makes everything look like the unexisting American Bermuda Triangle. Despite the film being mostly anticipated for the month of February, there are a lot of uninspired visual effects roaming all over the film and are completely overused just like his previous directed-films, which ruin the character developments for both Halle Berry, Patrick Wilson, and John Bradley’s characters. Lots of scenes are not so superb and they lack artistry to witness. The story and the screenplay are lazy, unenthused, and laggy, but even though the main trio of acting cast outdone themselves, they failed to save the mess for this film’s entirety. Even the ending got me unmoved, so that’s a double epic-fail for Emmerich.

Also featured in the film are Michael Peña (Ant-Man) as Tom Lopez, Charlie Plummer (All the Money in the World) as Sonny Harper, Kelly Yu (in her first Hollywood acting debut) as Michelle, and Donald Sutherland (The Hunger Games films) as Holdenfield. Most of the actors have done an explosive job, but for some unknown reason, a ton of characters in this movie perish with various individuals sporting NASA and space administration roles.

Choking in at exactly two hours, Moonfall is a major disappointment in my honest level of movie-viewing taste. Admittedly, it looks physically anticipating as it seems on the outside, but on the inside, it’s nothing too spiritually special. Despite some good acting performances delivered by Berry, Wilson, and Bradley, I honestly feel bad for them to use their professionalism and their time to work on this piece of junk and I feel like Emmerich should give up his “Master of Disaster” name and just focus on producing films with other film directors elsewhere. Sad and sorry to say, but this film is not the best for you when deciding what to choose for this month’s movie outing trip. I meant, if you’re a huge fan of Emmerich, then you can watch it. Otherwise, skip it!

Posted by Dallas Movie Screenings at 10:35 AM