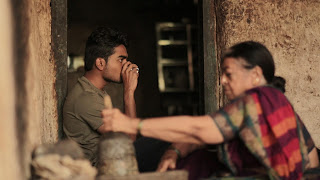 Koli Taal (The Chicken Curry) is a typical, international film that features an elderly couple who plans to cook chicken curry for his grandson, who is visiting them for dinner. But the main problem is that their dinner plan is disrupted when the family quickly discovers that the chicken goes missing.

Abhilash Shetty is the director of the film and mainly portrays Sumanth, the main protagonist in the film who is visiting his grandparents for dinner. His universal story of a relationship between grandparents and grandson grows entirely like it’s a trip to memory lane. The film is completely filled with interesting regional customs based on their family living and their accustomed generations. Thanks to his direction and his acting debut, the film allows us to clearly understand the beliefs, the habits and wonderful landscapes that we, either as Americans or immigrants, do not understand in our parts as we pay attention to this film. But the main event is the focal relationship between grandparents and grandchildren that has loads of dysfunctional family love and hospitality from older generations and is the same throughout the world.

It kills me painstakingly to see some dysfunctional family struggling to please their own family member(s) but bringing people together is always (and highly) a heartwarming strategy and is heavily demonstrated by the pieces of their family culture. It tells us the older we get, the more interesting (or dysfunctional) our family will be. That’s the theme of this story. Even the writing shows the turmoil on what’s happening in this film and the warm happy smile has slowly turned to fear and filled with suspense on the film’s climax when the disappearance of the chicken is soon discovered and the family, in the second half of the film, are searching to see where the chicken went or needs to know who could of possibly stole it. The answer seems to be anonymous, but the character development is marvelous. Not to mention the location is shot beautifully in the many scenes, giving the film and myself a photographic feel of being at home all the time in a different country, not the U.S .

A few handfuls of supportive actors who were portrayed as Sumanth’s grandparents came in the film. Here we have Prabhakar Kunder as Grandfather Manabala and Radha Ramachandra as Grandmother Vanaja. They both are really great, providing some family cultural details to their roots. Though, the main highlight of the performance is particularly the grandfather scenes, which makes the film produce an endearing character, thanks to Kunder’s strong acting skill after learning how to portray a grandparent in the film.

With beautiful scenes being filmed and well written, Koli Taal (The Chicken Curry) is a great film, clocking into almost eighty-three minutes. Be mindful that there’s some strong language (in captions) displayed throughout the film. I like it, but not a hundred-percent entirely. I meant it reminds me of my parents' history with Vietnam and their customs before they moved to the United States. While it’s certainly great and subtle to watch, if one who has traveled anywhere outside of America to visit their families, grandparents, or other relatives, this foriegn language film is sure to bring back many memories and create something new and exciting in future cases.