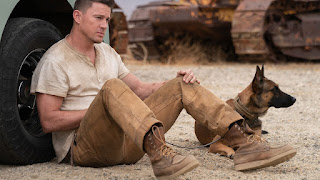 “Dog,” is not necessarily a great movie per se, but it is an enjoyable watch none the less.

In this real life comedy-drama, Channing Tatum (“G. I. Joe: The Rise of Cobra,” “White House Down”) is assigned a duty where he must transport his old friends war companion Lulu to his funeral in the middle of the country.

Like the counttless dog tales from the past, “K-9,” “Turner and Hooch,” and “Top Dog” come to mind, “Dog” adds little to the win column in making this a must see for viewers in the theater. Instead, it is just an easy watch since it does not contain anyhthing too grotesque or incentive for all ages. I think, no, I know this is why this one receved a PG-13 rating.

“Dog” is not a bad or bland movie, just one without a point or purpose. Sure, the pair get into their fair share of shenanigans and predicaments along the way, but in the end game of things I was left with a blaise feeling of so what?

The directors of “Dog” are Reid Caroln and Tatum. The pair have known each other for years, with Carolin receiving associate producer on “Stop-Loss,” (2008), a war drama that featured Tatum in a major role. Since that time on “Stop-Loss,” Carolin has been around Tatum’s career in some part of his career in some form or fashion.

Tatum’s Riggs persona is an easy watch, since he does not go through the motions, but also adds depth and layers to his real life plight since he suffers from PTSD.

Kevin Nash makes an appearance here as Gus, who has access to Lulu’s K-9 companion in his brother.

“Dog” is a worthwhile time waster, but don’t expect any Shakespeare inspired depth while watching this pleasant enough flick.