Everything Everywhere All At Once 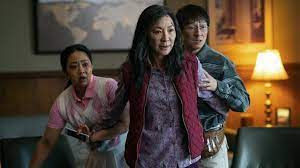 All the pieces of Everything Everywhere All At Once are all put together in one place!

A24 is known for making Oscar-winning and nominated films. This film held its world premiere at this year’s SXSW festival happening in Austin, TX, marking this film as a huge cultural celebration of Asian cinema for Asian filmmakers, animators, and families. The directing duo Dan Kwan and Daniel Scheinart, along with the film’s producers Anthony and Joe Russo, teamed up to craft this wondrous drama feature film that will certainly blow the audiences and celebrities away, featuring the main stars of Michelle Yoeh, Stephanie Hsu, and Ke Huy Quan.

A24’s Everything Everywhere All At Once focuses on a female Chinese laundromat owner Evelyn Wang who struggles to pay her taxes. However, she soon comes across a sudden realization when her husband Waymond informs her that she is an existent in many universes, where she alone can save the world and herself by exploring other universes that ties directly with the lives she could have led in her own destiny.

Michelle Yeoh (Crazy Rich Asians, Shang-Chi and the Legend of the Ten Rings) is the main entree of the film as Evelyn Wang, a Chinese immigrant who owns the laundromat and is experiencing difficulty filing her taxes. She is absolutely magnificent, given the fact that she always showcases her wide range of talents and her moves, from her martial art skills to her superb comical timing to her best ability to engender endless depths of rich human tenderness scattered across the screen from either a glance or reaction. Actress Stephanie Hsu (The Marvelous Mrs. Maisel) additionally stands by her side as Evelyn’s daughter Joy Wang whose alter-ego is revealed to be Jobu Tupaki in Evelyn’s different universes. Their performances are outstanding as the steady chemistry between Yeoh and Hsu are exquisite, forming a strong mother-daughter relationship as part of the film’s themes, dynamics, and emotional messages. They are also extremely hilarious, providing some wacky colors and confetti flying all over the scenes, including some funnier action sequences, while trying to fit the bill of being an action-drama film.

But the show stealer out of the main two actors right there none other than Ke Huy Quan (The Goonies, Indiana Jones and the Temple of Doom) who supportingly plays as Waymong, Evelyn’s husband who is reveals that she’s existent in multiverse as if she’s a non-player avatar (or character) in a virtual game. He’s the Jackie Chan of all traits, going hardcore from learning martial arts lessons for fight scenes to becoming Jackie Chan when he knows how to get up and fight to save his wife and his family. He looks like he is born to play a husband and a father to a child as the chemistry between Yeoh and Quan as Evelyn and Waymond flows steadily in both the real world and the multi-worlds. As they travel back and forth throughout the multiverses and the film as a whole, their relationship grows stronger and stronger.

This film marks the second motion picture for both Dan Kwan and Daniel Scheinart (or simply called the duo “Daniels”) as film directors after making their directorial debut on Swiss Army Man, which features the stars of Paul Dano, Daniel Radcliffe, and Mary Elizabeth Winstead, and also serve as screenwriters for this film as well. The story is well put together going from the opening scene where life is a happy family before reaching the dissatisfied and depressing colors where the family becomes unhappy and dysfunctional. The main themes in the film are stress, trauma, and destiny as Waymond. The “Daniels” express their excitement with a little caring concern with the characters as these characters learn how the family should “grow up” and then learn how their relationships, the future, and their ways of dealing with trauma affect their loved ones entirely. The fight sequences provided by choreographed by Andy and Brian Le have a balletic beauty in them in order to find the right structural components for a wuxia-theme film as the beautiful cinematography is placed into wide shots allowing the whole bodies to fill the frame slowly and surely. Not to mention, there’s graphic nudity and graphic exposures shown in the film to provide a laugh-to-death comedy in the background that surprises the whole audience. And last but not least, the Russo brothers, Anthony and Joe, known for directing Avengers: Endgame, also serve as producers of the film.

There are a plethora of references from several wuxia and martial films, including Crouching Tiger, Hidden Dragon and that drives this plot line. Even Pixar’s Ratatouille adds a lot of comedy for this conception of emphasizing the drama and the humor in it, thanks to the humorous screenwriting of Daniels and editor Paul Rogers who puts a pacing effort to craft such a fine script connecting the dots to the multiverse. Even some time-traveling flashback sequences, including Michelle Yeoh’s own Crazy Rich Asians premiere experience, contains some easy-to-miss nostalgic references right there based on one’s real life situation. This is where the intensity of the climax builds and so does the fighting sequences.

With the fancier colors, dramatic acting, and much humorous dialogue all in one place, A24’s Everything Everywhere All At Once is an amazing film, clocking up to 140 minutes. It’s a game changer to many multiverse stories most filmmakers like to tell. Thanks to Daniels’ direction, Michelle Yeoh really brings the acting house down and so does the cast really made this film possible to get some action, laughs, and emotions we all desperately needed. This film is a must, no joke. Though, be warned there’s some flashy, photogenic images that might affect photosensitive viewers, especially for children as we get to the flashback scenes and sequences shown in the film. But they are filled with comedy and heartwarming moments that will make the audience understand what this whole family situation will be. You really should watch this if you have the chance. I think this film and some of their acting would be Oscar worthy for next year’s ceremony.

Email ThisBlogThis!Share to TwitterShare to FacebookShare to Pinterest
Labels: Everything Everywhere All At Once review, Henry Pham