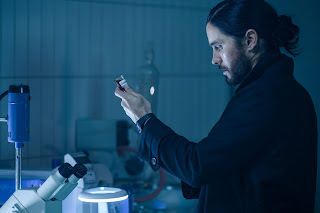 You know the real term for a science-fiction film is just “science” being the center of attention. In rare times, the world gets to see how characters got their superpowers with a logical explanation being shown in this anticipating, superhero film. Morbius serves as another of Sony's own cinematic adventures after 2018’s Venom, following the footsteps of Marvel cinematic Universe. Director Daniel Espinosa is standing right in front to helm his first-time superhero film the Spider-Man and Venom fans will never forget, featuring the Oscar winner Jared Leto in his titular role.

Morbius centers entirely on Dr. Michael Morbius, the Nobel Prize-winning scientist who, after suffering from a rare blood disease, finds the most dangerous cure in order to medically cure him after years of searching. Though, the biggest conflict about this cure is that it turns him into a living-fighting monster with a strong form of transgenic vampirism, which lead to become a vicious vampire with unique super-like abilities.

Oscar winner Jared Leto (Dallas Buyers Club) receives his meatier-protagonist role as Dr. Michael Morbius, a scientist who searches for the cure for his rare blood disease, while Matt Smith receives his villainy role as Michael Morbius’ brother-turned-enemy Milo who plans to use Michael’s dangerous cure to cure himself as well. The Michael Morbius character is actually an anti-hero in the film, harboring a similar personality like Tom Hardy in Venom respectively. Leto really did a good job in the film, though the problem is that his role itself is not very well written based on the screenwriting duty from Matt Sazama and Burk Sharpless. They pushed the character too hard with no character development being studied. On the other hand, Matt Smith is the one who had the most fun with his role as he looks like he is having the time of his life.

Director Daniel Espinosa is calling all the shots in this movie. He encourages Jared Leto to take the role whether he plays a hero or a villain and advises Leto to just go with the flow. For his direction, the story starts off nicely and well-done, but later on, it becomes increasingly dry and empty as Espinosa has a bigger fish to fry on the focused Morbius character as he is able to amp his commitments in his direction, his ways of guiding Jared Leto, and both the CGI and the visual effects departments. However, he does a great job on showcasing who Morbius is and what his powers are going to be, reminding me of that 2005 film Batman Begins. According to both Espinosa and Leto, they knew that Morbius is another interesting character to be presented properly. Unfortunately, Sony again has surpassed themselves since they squandered so many opportunities with the Venom films.

Like the Venom films, the visual effects and the CGI are great and all from the very start but ended up being lazy in the second half of the film, most notably the climax battle between Michael and Milo. The action sequences, however, are awesome and pretty much contributive enough to provide some decent amusement towards viewers. My main reason someone is interested in this action-packed film is to understand how everything connects, given all the easter eggs and references from the trailers. Hard to say, don't ever expect too much from those trailers, because by the time you watch this film, you will be extremely disappointed. Even the ending is not worth the effort to understand anything on my honesty level, letting the after-credits scenes do all the work, which you need to stick around for that as they provide some small cliffhangers for the next Moribus film [possibly] and some future Marvel films, connecting the dots to MCU.

Also starring in the film is actress Adria Adjona who aids on Jared Leto’s side as Michael Morbius’ girlfriend Martine. She’s amazing at her job as she guides Michael Moribus on telling what needs to be done and to understand what is right for him and what choices he has. The next supporting actor appearing is Jared Harris (Mad Men) who walks into the scene as Nicholas, a mentor and father figure for Morbius and Milo who runs a medical facility that looks after people with incurable diseases. And lastly, we have actors Al Madrigal (The Way Back) and Tyrese Gibson (Fast & Furious films) running around the set as Alberto Rodriguez and Simon Stroud, the two FBI agents who are hunting for Dr. Michael Morbius.

In a surprising ironic twist actor Michael Keaton stands and delivers in this film, reprising his role as Adrian Toomes/The Vulture from MCU’s Spider-Man: Homecoming. Despite some small screen time, his performance is just the anticipation for the inevitable for anybody who has seen the MCU’s Spider-Man films to see what his future plans will be in future films. This similar stint also happened to actor J.K. Simmons appeared as J. Jonah Jameson in both Sam Raimi’s trilogy and the MCU after making a cameo appearance in Spider-Man: Far From Home before getting his role extended in No Way Home.

Although Morbius is not a bad movie nor a good movie, it just kind of sits in the “mixed-average” section. Though I must admit, it’s a fun movie thanks to the performances from Jared Leto himself and so did the actors. It falls short on everything into place as if this is another Venom movie which is what Espinosa wants to do in his whole career when it comes to crafting a subtle comic-book movie just like the MCU films. I do respect the director’s ambition on making a simple superhero film as he does have some good tastes in them. Running up to at least 104 minutes, I must caution you to think about this film before you decide to watch it.