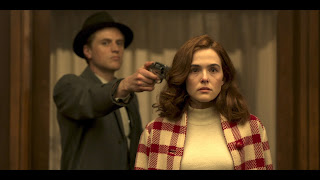 The Outfit is looking sharp for that tight thriller game!

If you want something cheap, why not pick this film for your spring break outing. It’s the price of admission for your own personal outing. This film has The Godfather vibes all over in the film. To answer that question, this is not a kids’ movie as this film is mainly targeted for older teens and younger adults. But whatever the case, you better put on your energy pills because director Graham Moore is taking you for a thrill of a lifetime with The Outfit, featuring the Oscar winner Mark Rylance.

The Outfit focuses on an English master tailor, Leonard, who runs a small, high-end tailor shop in Chicago along with his protégé, Mabel. Though the only problem is that the shop is discovered to be the only shop where people came in to afford his clothes and that is a local gangster named Roy Boyle along with his gangster family who show up late one evening. With that, Leonard is forced to outwit the enemies to make it through the lasting evening.

Oscar winner Mark Rylance (Bridge of Spies) stars as Leonard, an English tailor whose loyal customers mainly consist of a family of gangsters, while Simon Russell Beale receives his meatier role as Roy, the leader of the gangster family with a side of understanding mindset. As an actor, Rylance astonishingly escalates his acting chops and skills in this film. He has the perfect demeanor to portray this character and he often uses classy English-British established acts and traits to engage with the audience and critics. Actor Dylan O’Brien (Maze Runner films), who portrays Roy's son Richie, is very serious when playing a criminal-gangster role, expressing his disdain to match his character trait.

Graham Moore makes his sensational directorial debut and also serves as a co-writer alongside Jonathan McClain. To those who don’t know Moore, he is an Oscar-winning screenwriter for his 2014 film The Imitation Game, which features Benedict Cumberbatch. As the director of this film, he really rocks in his job as a fine film director, taking many influences from directors Martin Scorsese, Francis Ford Cappola, and Quentin Tarantino and adding some key elements from them. Even though this is his first time directing a movie, he’s going to give everything he has got as if he wants to play his cards right without losing.

The film is heavily shot in just one location, which is a brilliant, smart move in order to keep the production costs down as these experiences gave the audience the opportunity to study the characters developing their own unique persona, let their tensions build up rapidly, and keep everything in order. The costume designs and the production designs viciously sets the tone and mood for the era and elegance of the high-end Englandian shop despite the Chicago setting. They both feel like these two are very special for whatever time periods lapsed in London or anywhere in England. Since the main setting is all in one place, the set dressings serve as major assistants to the film and are completely top-notch for the film’s structure and integrity. The music score from Alexandre Desplat keeps the ongoing pace of the film, showing the companion piece to Leonard's action wits as he tries to defeat and outsmart the criminal gangs. Of course, the abundant cinematography offered from Dick Pope also sweeps in through the shop and holds the precision when the tendency rises from above.

Also featured in the film are Zoey Deutch, Johnny Flynn, and Nikki Amuka-Bird. Zoey Deutch (Netflix's Set It Up) plays as Leonard’s assistant Mable in the film and she seems very confident in her role as she knows what she wants to do and how she is going to reach the top. Johnny Flynn (Emma) is Roy's nephew and another evil henchman who is not afraid to let his fear get in the way as well as showing his true colors and intentions. Actress Nikki Amuka-Bird (Old) is given the role as Violet, in which her name refers to the term “violence,” and she brings a bold, meatier performance to the film. This goes to show, any sexy-hot actress appearing in action and crime films always leads the audience to ponder what it was like for her to show her own true personality.

Please don't let these minor issues get you in the way when you’re planning on seeing this film. The Outfit is a great movie, lining up through 105 minutes. The director is enjoying his job on crafting this interesting crime movie that will blow you away, but the main event is the cast, which is top-notch when it comes to acting and making action sequences. The actors are what makes the plot line fairly go down easily. When you throw in some great acting tips with the characters you care about, you will certainly become attached to them. This film is going to be flown under anyone’s radar, but it goes great for your spring break movie trip down the road.