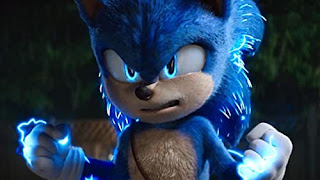 Sonic the Hedgehog 2 slowly improves its speed and power.

This year, we’re heading back to the world of Sonic the Hedgehog series, thanks to the team behind the first Sonic the Hedgehog film. Must heavily advise, if you folks haven’t seen the first film yet, then you need to watch that first before heading over to this one because this film is going to be very interesting to see when new, anticipating characters come to life. As the director Jeff Fowler is returning onstage to helm this sequel, the cast from the first film returns as well, consisting Ben Schwartz, James Marsden, Tika Sumpter, and Jim Carrey.

Sonic the Hedgehog 2 picks up where the first film left off, centering on Sonic, an anthropomorphic blue hedgehog, whose ultimate goal is to be a hero of his town. Though the problem is his best friend and father-figure Tom Wachowski, who plans to take a vacation with his wife Maddie, tells him that he is not ready to fight crime as he needs to be patient and learn the responsibility of how he can handle things smoothly as he is growing up.

Actor Ben Schwartz (Parks and Recreation) reprises his role as Sonic, an anthropomorphic blue hedgehog who can run at supersonic speeds. As he is continuously fighting crime against evil, he wishes to use his powers to be a hero and save lives but is deemed too immature and reckless. James Marsden (X-Men film series) and Tika Sumpter (Ride Along films) also reprise their roles as Tom, Sonic’s best friend, and Maddie, whom they are taking a trip to Hawaii to attend Rachel’s wedding. Like the first film, Schwartz, Mardsen, and Sumpter are superb in the sequel as they want to make this film as entertaining as ever, but with newer adventures along the way. They seem comically hilarious and sounded like they were actually getting along pretty well under the complete guidance from Jeff Fowler, but Schwartz really stole the hearts and spotlight out of all the returning cast which makes me wonder if the current Sonic voice actor Roger Craig Smith would approve of his performance in this sequel. Who knows, based on my analysis, he’ll probably get a good laugh out of that while expressing his approval and endorsement towards Schwartz on his voice acting job.

On the other side, the great Jim Carrey (The Mask, How The Grinch Stole Christmas!) returns in the sequel, reprising his role as Dr. “Eggman” Robotnik, a mad scientist who, after returning to Earth, bends on revenge on Sonic the Hedgehog by teaming up with Knuckles (voiced by newcomer Idris Elba), an anthropomorphic red echidna with a super-strength ability, to find the Master Emerald and defeat Sonic once and for all. Carrey is no stranger to any films or television shows as he is like no other actor who can play (or voice) comically as Dr. Eggman respectively just like what he did in the first film. His performance can be filled with comedy, but he’s being very crucial and consequential in his part. Admittedly, Carrey never fails and disappoints his fans. Based on what he does in each of his scenes and timeframes, he is a vital part about this film.

The story and the designs from the newly-revealed Tails and Knuckles are exquisite, but the pacing and the screenwriting duties handled by Pat Casey, Josh Miller, and John Whittington are the main big issues in the film. If you ever go back to watch the first film, that is where the real conflict started in some scenes from that film, this is where the director and screenwriters don’t take the high road when it comes to handling the storytelling work, the lazy screenwriting, and the CGI usages for an ordinary feature film that is meant for children and families of all ages.

However, after his experience with directing the first film, what Jeff Fowler does smoothly and steadily is to make all the characters being more realistic in their portrayal of said personas, mostly on the Sonic, Tails, and Knuckles’ character. His commitment on exploring the personas and the character developments of Sonic, Tails, and Knuckles really shows how much these characters mean to him as he graciously showed honor, compassion, and devotion to go great lengths of studying their character developments based on the earlier video games and media, especially when the messages and the importances of a loving family and friendship are the essences of the film’s dynamics. To add to that perspective, the visuals, the references, and the inside jokes are very comical and completely spot on.

Also appearing in the film are Natasha Rothwell as Maddie’s sister Rachel who is getting married, Adam Pally as Tom’s friend and Green Hills deputy sheriff Wade, Lee Majdoub as Dr. Robotnik’s assistant Agent Stone, and newcomer Shemar Moore (Criminal Minds) as Rachel’s fiancé-turned-secret-agent Randall. In addition to the cast, experienced voice actress Colleen O'Shaughnessey, who is the current voice of Tails in the Sonic the Hedgehog franchise, receives her opportunity to voice Tails again in this feature film, marking her the only cast member from the Sonic video game series to ever reprise her role in the film.

Leaning up to at least two hours for that time slot, Sonic the Hedgehog 2 is a greater sequel that improves its flaws and damage. With Fowler’s somewhat-improved direction, Schwartz, Marsden, Sumpter, and Carrey really outdone themselves, bringing a truckload of goofier moments that will leave the audience to burst their bubble. I enjoyed Sonic the Hedgehog 2 and I think this sequel is a must for everyone, especially for Sonic fans out there. This sequel delivers the goods in every single department for balancing out the various devices, the characters’ antics, and the circumstances beyond the casts and crews’ control that can make a great, seducing cinematic pudding that can make me want to go back in time to play some Sonic video games. And lastly, please stick around for the after-credits scenes as this one leaves a cliffhanger for the next Sonic the Hedgehog film and the sudden about-to-be-revealed new character you’re familiarized with from the past games you played at home (or at the arcade).