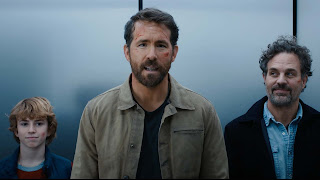 The Adam Project is a scientific project that requires extra push.

You are very familiar with the 80s sci-fi classics like E.T. The Extra Terrestrial and Back to the Future. This film makes the audiences remember their time in the 80s where science fiction films became a landmark thanks to the usages of technology and CGI. Shawn Levy wants to relive the classical 80s era by making a science-fiction film, packed with action-adventure pieces to the puzzle, featuring the stars of Ryan Reynolds and Walker Scobell.

The Adam Project focuses on time-traveling pilot Adam Reed who crashlands in the year 2022 and is forced to team with his younger, pre-teen self on his ultimate goal of saving the future.

Deadpool star Ryan Reynolds stars as Adam Reed, a futuristic fighter pilot who’s stolen a time jet in order to leap back in time and save the woman he loves, while child actor Walker Scobell (in his acting debut) portrays Adam Reed’s younger self. Reynolds is a neat actor and is no stranger to science fiction films and action-adventure films. He is destined to be his own unique way of acting, even being hilarious at any time, but on the inside, he is filled with emotion at heart. Walker Scobell, on the other hand, is an amazing show stealer who serves as the future Adam Reed’s conscience and mentor of his past.

This film marks Ryan Reynolds’ another collaboration with director Shawn Levy after Free Guy. The story flows very gently as this film gathers lots of nostalgic moments that unravels the sci-fi magic of the ‘80s while packing some epic-adventure feels and heartfelt moral lessons that needed to be taken accountability for it while studying the grasps of science-fiction films and stories. Even the chemistry between Ryan Reynolds and Walker Scobell is really filled with heartwarming tenderness. What can be exciting is that Levy additionally installed some impressive action sequences, including the fight scenes, which are made simple yet beautifully effective to give the film and its climax some bonus points. Though parts of the story and the editing really need much more work.

The main themes of this film are not just time traveling, but also family issues that affect one’s own past. In this case, Adam’s relationship with his father, portrayed by Mark Ruffalo (Marvel’s The Avengers). That’s the main reason why the director wants to focus on filming the reconciling of Adam’s own past as it is about saving the future, a neat touch that elevates this the message of time-traveling and gives both the film and the character development of future and younger Adam Reed a tremendous amount of depth.

The Adam Project is ok, but it’s certainly a thoughtful, gritty mash-up of all the 80s’ type movies that needs a little push to it. Basically, it’s like E.T., Back to the Future, and The Last Starfighter being fairly mixed together with some wonderful performances from a cast that clearly loves science fiction films to work on. Above all, Ryan Reynolds is top notch for the Adam Reed character and so is Walker Scobell who clearly matches his kiddie punch, even with a great acting debut performance. While not as great as the classic 80s sci-fi films, The Adam Project is just a rehash to the family sci-fi flicks from the 1970s and 1980s, packed full of Steven Spielberg-like consistency. The film is up on Netflix.