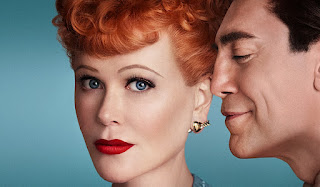 Lucy and Desi is a documentary film that explores the rising star of Lucille Ball on her television career in I Love Lucy as well as her relationship with Desi Arnaz while taping her show. This documentary also explains how Ball’s career and her relationship with Desi from the groundbreaking television show has created a huge impact to many fans, celebrities, and audiences that will forever change Hollywood, cementing her legacy during her lifetime and after her time of death in 1989.

Lucy and Desi is Amy Poehler’s directorial debut on a documentary feature film. To those who don’t know Amy Poehler, she is an actress, known for her portrayal as Leslie Knope in Parks and Recreation. She also worked on Saturday Night Live and did the voice of Joy from Pixar’s Inside Out, directed by Pete Docter. If you had hardly noticed, there was another film called Being the Ricardos, which was released last year and featured Nicole Kidman as Lucille Ball and Javier Bardem as Desi Arnaz. And to add to that comment, that film officially received some nominations for this upcoming Oscar ceremony, which honors the films being released in 2021.

Poehler is not calling out the shots; she and writer Mark Monroe utilized several stock and archive footage on Lucille Ball, her career in I Love Lucy, and her history, including her questionable role as a Communist. Poehler had the ambition of creating this magical piece of work as actress Lucille Ball was one of her influences on why she wanted to become an actress. She and her team, including some interviews from celebrities, always pour so much effort and difficult tasks on editing major clips and interviews as well as shooting some present-day scenes in Lucille's hometown at Jamestown, NY.

All the ingredients, pieces, and dynamics are in place, but some of the clips and archive footage of Lucille Ball’s interesting turn of events have been cut off to save time as the director has been balancing the attention between Ball’s life and career and the interviewees exclaiming how Lucille Ball had shine the light in both Hollywood and the television world. Nevertheless, it’s something people want to see more of Ball as a fun-filled actress without engaging into politics and Hollywood scandals flowing around the area. Politics are something lots of people have stresses and fears about.

Several stars and some legendary figures voiced their opinions on the interviews about Ball’s career and her enduring legacy. These interviews include Carol Burnett, Norman Lear, Bette Midler, and Lucy and Desi’s children, Lucie Arnaz and Desi Arnaz Jr. The living family members of the cast and crew who worked on I Love Lucy also made their appearance as interviewing guests. Filmmakers Ron Howard and Brian Grazer also served as executive producers for the film.

Rounding up to almost 103 minutes at length, Lucy and Desi is a great documentary, maybe making this film better to watch than Being the Ricardos. I know it’s just a documentary film but it’s very remarkable to see and to refresh the memories of Lucille Ball from her early start to her major success as a actress and a female activist towards many people who knew about her in her lifetime and her life-long fans and colleagues who idolized her throughout their life. This film is a must and it’s something that needs to be cherished from time to time. Poehler and her wise-cracking team know how to revamp the modern legacy of Lucille Ball. You really should see it if you can on Amazon Prime Video.