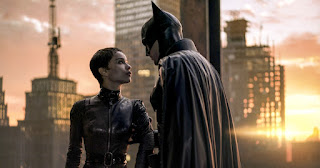 Riddle me this with Matt Reeves’ The Batman!

Just to be clear, this new Batman film serves as a reboot of the iterating Batman film series and is not part of the DC Extended Universe lineup as director Matt Reeves and Robert Pattinson want to give the Bruce Wayne/Batman persona a refreshing take. Thereby, most of the actors have been recast. As many of you have known, the Batman character has appeared in plethora of films portrayed (or voiced) by different actors for many years, but at least we get to see what the origins of this Gotham City hero as Reeves takes you along for the ride in the Batmobile, featuring the stars of Pattinson and Zoë Kravitz respectively.

The Batman takes place in Bruce Wayne’s early adult years as Batman whose main plan is to pursue and capture the Riddler, a notorious serial killer who is targeting the Gotham City citizens, while unraveling the corruption that ties directly to his own family during the investigation.

English actor Robert Pattinson (The Twilight Saga films, Tenet) receives his main superhero role as Bruce Wayne/Batman, an eccentric-reclusive billionaire who protects the citizens at Gotham City at all cost while actress Zoë Kravitz (The Divergent films, X-Men: First Class) reprises her role as Selina Kyle/Catwoman. To those who don’t know Pattinson, he was portrayed as Edward Cullen in the The Twilight Saga films as well as Cedric Diggory in Harry Potter and the Goblet of Fire. He also appeared in Christopher Nolan-directed film Tenet, co-starring with John David Washington. And as for Zoë Kravitz, this isn’t her first time playing Catwoman as she has previously voiced Catwoman in the animated film The Lego Batman Movie, a spin-off of The Lego Movie.

As an actor, Pattinson really nailed down the Batman role nicely and emotionally as he sounded like he needed to build up his Batman shape with his acting skills and the previous Batman films and television series as his major influences on how can portray Batman perfectly, even Ben Affleck would agree with him regardless of his performance. He also demonstrates the power of how family emotional roots can be as he slowly discovers what his true past endears. On the flip side, Zoë Kravitz really steals the show as Catwoman who meets and allies Batman. She is very stunning, sexy, and an amazing actress in the film as she tries her best to be the best Catwoman, the best sidekick/hero, and the best supporting actress to the main protagonist by learning the action tricks up her sleeve. She seems like she is willing to do whatever it takes to earn the Catwoman role so bad. Both of these two actors are really outstanding and they look like they’re almost a cute couple on the inside too. To that affair, Pattinson may or may not be the best Batman, but he’s an excellent Batman at all costs.

The film is directed by Matt Reeves who got himself into his big breakout directing role in The Batman. Before this happens, Reeves did one of the biggest busts with his career rendition of two recent Rise of the Planet of the Apes sequels, Dawn of the Planet of the Apes and War for the Planet of the Apes. Under his direction, the story and the settings are dark, depressing, gritty, and gloomy as he is looking back at the previous Batman films and television series to find the right movie-chemical ingredient for the film’s subtle plot and Robert Pattinson’s Batman character. It seems though Reeves is going to do something different today as if he’s making a comeback on returning to the film director’s chair, something he has done before. From my instinct on movies, it looks like he is treating this film as another science-fiction gig based on his resume.

The cast, the visual effects team, and the rest of the crew really have themselves a tremendous job. This is the kind of film Matt Reeves really wants to amp up the Batman persona when he is able to amp up the visuals as well, thanks to his visual effects artists and workers who are involved in this film. The CGI is great and not overly blown by the tones and depths of any superhero movie. Even the lovely-yet-intense music from Oscar-winning composer Michael Giacchino (Up) takes a new approach from Hans Zimmer, James Newton Howard, and Danny Elfman.

Also involved in The Batman are actors Jeffery Wright (The James Bond films, The Hunger Games films) as Batman’s friend and Gotham City police officer James Gordon, John Turturro (The Big Lebowski) as Gotham City crime lord Carmine Falcone, Peter Sarsgaard (Shattered Glass) as Gotham City district attorney Gil Colson, and Andy Serkis (The Lord of the Rings trilogy) as Batman’s butler and mentor Alfred Pennyworth. We have actor Paul Dano (12 Years of Slave) as the main villain called the Riddler, a serial killer who is targeting the citizens in Gotham City and living his life of crime against the city and the innocent people. And lastly, we have Colin Farrell (The Lobster, Daredevil) as Oswald Cobberpot/Penguin, a crime lord and Catwoman’s boss.

I’m no stranger to movies, but I think The Batman is a great film, though be warned that this movie runs about three hours, the same time-consuming stint happened to Avengers: Endgame, and it’s not meant for kids under the age of 10. Admittedly, Matt Reeves really shows the definition of confidence, not the definition of incompetence when he puts his energy and genius-ness to this anticipating DC Comics film and so does Robert Pattinson, who really saved the day by not just acting, but by just being himself entirely which lead me to say that this new Batman film is “The Bob Iger of DC Comics movies.” Before I finish here, the ending leaves a cliffhanger on what Batman’s next big crime-fighting adventure will be in the future sequels.