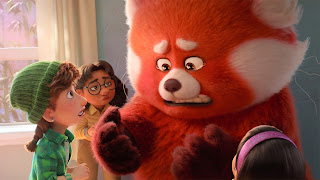 Turning Red is the third Pixar film to not be issued a theatrical release after Soul and Luca. This film is like Kung Fu Panda and The Incredible Hulk mashed up together, but is way cuter and more child-like in that manner. As the studio engages in cultural-diversity lectures, Domee Shi receives her big break by helming another original film from Pixar Animation Studios that will certainly blow the fans and audiences away. Actresses Rosalie Chang and Sandra Oh received their main, mightier roles in the film.

Turning Red focuses on 13-year-old teenage girl named Mei Lee who is torn between being her mother and the chaos of her youth as she wants to have freedom to do whatever she wants rather than following her family roots. However, there is one small problem: whenever she gets too excited or stressed about something, she turns into a big red panda and goes back to her own human form when she feels calm. With this situation, she must figure out a way to get herself back into her own human self for good.

Actress Rosalie Chang, in her film debut, voices Mei Lee, a young teenage girl who happens to transform herself into a big red panda whenever excitement or stressfulness foams over her, while Sandra Oh voices Mei Lee’s overprotective mother Ming who forbids her to talk to some boys and attend the concert.

Turning Red serves as a first-time feature film for Pixar director Domee Shi, leading her to become the second woman to direct a Pixar film (after Brenda Chapman for Brave) and the first woman of color to do so. As you may have known, she directed her own Pixar short Bao, becoming the first woman to direct a Pixar short, leading her to receive an Oscar for Best Animated Short Film. The short film was released in front of Incredibles 2.

Shi’s direction, the story, and the animation chores are superb thanks to Shi herself, writer Julia Cho, producer Lindsey Collins, and the team of animators. Shi crafts the story by utilizing her own experiences as she grows up, bringing the references and images based on her own youthhood and personal trauma when she has while following her own family roots and her Canadian roots at the same time. The references from Pixar’s Bao is an easy foresight, adding her integrity and confidence to build up her artistic ways of storytelling and building climaxes along the way. This is what the real definition of what Pixar filmmaking has to be done in the shape of any visionary storyteller like Andrew Stanton, Dan Scanlon, and Pete Docter, with the latter two serving as executive producers of the film. In addition, the music duties coming from Oscar-winning composer Ludwig Göransson (Black Panther), Billie Eilish, and her brother Finneas O’Connell adds a nice, enduring sparkle for engaging family customs and the representation of Asian people around the film.

In the film, the aspects of family dynamics, one’s own freedom of choice, and the use of Asian culture take the center stage, since the main family characters' devotion to religious ritual are put into place. For that case, in the second half of the film, it’s mainly about Mei Lee who wants to go to the boys band concert, against her mother’s wishes, instead of the annual family ritual that coincides the same day as the concert. It pretty much seems that Mei only wanted to do something new for once in her life though she refused to break the family tradition entirely. Family traditions are just one important thing Mei’s mother has mainly focused on but soon realizes her devotion of passing down the tradition is the threat to Mei Lee’s well-being, freedom, and her own right to do whatever she wants. The chemistry between Mei and her mother really hammers down the mother-daughter dysfunctional relationship and constantly finds new ways of weaving the tableau to make this family-feature film as dynamic as the previous Pixar films.

The rest of the voice cast did a great job as well. The film includes Ava Morse, Hyein Park, and Maitreyi Ramakrishman as Mei’s friends, Orion Lee as Mei’s father Jin, Wai Ching Ho as Mei’s grandmother, Tristan Allerick Chen as Mei’s bully Tyler, and James Hong as Mr. Gao. The boys from the 4 Town band are also voiced by Jordan Fisher, Finneas O’Connell, Josh Levi, Topher Ngo, and Grayson Villanueva. However, for some strange reason, Pixar mainstay John Ratzenberger hasn’t had a cameo in the film.

Pixar’s Turning Red is a wonderful animated film, clocking in 100 minutes. Director Domee Shi and the voice cast are what makes the story filled with tears and strong heartwarming lessons and I can’t wait to hear more stories coming from women at Pixar. Though, it’s very sad that this film didn’t get a theatrical release, but it’s worth the wait, even though we have COVID-19 disturbance and dilemma to deal with. Hopefully, the main goal for the future of Pixar is to release a film theatrically once the world is getting increasingly better. But for now, enjoy this piece of work as the film is up on Disney+.