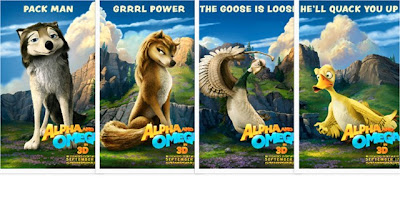 Humphrey and his friends are the aimless adolescent fun loving young males of their wolf pack. They don't really have any responsibility as they are omegas and not alphas. Like Kate, the daughter of their pack leader. She has to go to Alpha school during the summer to learn how to lead and feed the wolves of their pack. Although Humphrey has a major crush on Kate, being an omega means that he doesn't have a chance with an alpha.

Wolves prey on the caribou but there not enough to feed the two competing packs of area. The leaders Winston (Danny Glover) and Tony (Dennis Hopper in his last role) are facing a major conflict between the neighboring packs unless they unite with a marriage alliance of their offspring Kate (Hayden Panettiere) and Garth (Chris Carmack). Kate hears their plan and knows her responsibility to her clan and reluctantly agrees for the sake of the pack. Kate's mother (Vicki Lewis) is more ambitious than her mate Winston and promises wolf violence to ensure their alpha wolf standing. Humphrey (Justin Long) knows he can't compare to Garth's strong macho wolfishness. Kate is also not immune to his charms until he tries to howl, and she realizes that he's not a good fita. His howling is so bad that birds drop out of the sky dazed and confused. Kate's sister Lilly (Christina Ricci) however yearns for the alpha wolf, but alas she is only an omega. Humphrey follows Kate when she leaves the howling ceremony when the two are captured by forest rangers who take them to another national park to repopulate Idaho's Sawtooth region. Once they discover their predicament they utilize the help of two fowl, an English duck (Eric Price) and a French-Canadian golfing goose (Larry Price) to help them get pack to Jasper National Park. Catching rides in a camper and a train, getting chased by bears, Kate and Humphrey have to learn how to work together if they are to return home before the packs go to war with each other.

Directors Anthony Bell and Ben Cluck would have been better served if they eliminated the musical sequences that humanize the wolves even more than they should be from the script from Christopher Denk and Steve Moore. Even the wolf howling sounds like pop riffs on American Idol. To have treated the wolves as more wolf-like would have been a better lesson for the children hungry for new 3D features. The story is of the two classes of wolf society, the alphas and omegas in a Romeo Juliet element without the tragic ending. Kate and Humphrey learn from their adventure getting back to their families, it doesn't matter if you are an alpha or omega wolf, you can rise to any challenge and love is where you find it.
(Review by reesa)

Posted by Dallas Movie Screenings at 12:34 AM

Email ThisBlogThis!Share to TwitterShare to FacebookShare to Pinterest
Labels: Alpha and Omega