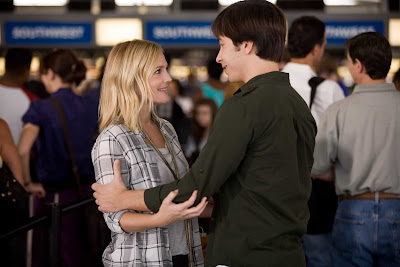 Erin works as an intern at a New York newspaper hoping to get a job offer before she has to go back to Northern California. Garrett was just dumped by his girlfriend and works for a record label that is making him develop pop money pits instead of music that is actually good. One night they meet over a Centipede game at a local bar where they are hanging out with friends. Erin and Garret hit it off right away and become inseparable in the 6 weeks that Erin has left before she has to leave.

Drew Barrymore and Justin Long play Erin and Garrett a couple who try to maintain a long distant relationship in New York and San Francisco. In today's social network universe, they keep in touch by phone, video cam, and texting. Doing what most couples do, but just doing it online. Of course it's not quite enough especially since the couple does not have the physical satisfaction of being together. Flying to each other's cities is cost prohibited during the holidays, and also makes for awkward encounters when meeting family. Garret has his two best friends Dan and Box (Charlie Day and Jason Sudeikis) to help keep him distracted while he pines for his girlfriend. Erin has her over protective sister Corinne (Christina Applegate) and her family while she works as a waitress hoping for a writers job. The strain of their separation comes to a climax when Erin is offered a job at the San Francisco Chronicle thereby sabotaging their plan to move back to New York to be with Garrett.

Documentary film maker Nanette Burstein's first fiction feature is filled with clumsy vulgarity that goes for the cheap laughs. Garrett's pals are the greek chorus filling scenes with 30 something arrested development humor while Christina Applegate is wasted as the germ-a-phobic mother who has a nose for icky odors. Audiences will be curious to see the real life pairing of Barrymore and Long, but their chemistry on screen seems almost forced. The film while trying to be a clever rom-com for today's working class late 20's and early 30's adults sputters awkwardly. The humor and language is raunchy so bringing the kids might be in poor taste, but funny for older teens and adults. The difficulty of the concept is how to make a long distance romance interesting when they spend most of the movie pining for one another online. Instead of going the distance, they should have stayed close to home.
(Review by reesa)

Email ThisBlogThis!Share to TwitterShare to FacebookShare to Pinterest
Labels: Going the Distance review