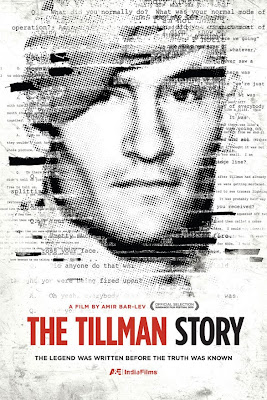 In 2004, the former Arizona Cardinal football player Pat Tillman was killed in Afghanistan after leaving his career behind to enlist. The US Government tried to mythologize the squared jawed all American into a legend. This film clarifies the myth from the family's side.

Amir Bar-Lev (My Kid Could Paint That) offers the other side of the story regarding how the Tillman was used to help sell the war. Tillman was the epitome of what the nation considered a hero. Handsome, athletic, and self depreciating, Tillman even married his childhood sweetheart. He joined the Army after feeling a need to do something constructive after 9/11. He gave up his NFL career and joined the service with his brother wanting to be treated without any special concessions. As his time overseas progressed, he started reading anti war writings of Noam Chomsky. He was disillusioned as to why we were really there. Returning for another tour of duty, he was killed in what the Army proclaimed was enemy fire while saving the lives of his comrades. The news media ran with the story elevating him to the status of a great American hero. Shortly after it was discovered that the US military was covering up his death by friendly fire. Tillman was honored in a public memorial service attended by dignitaries.

Most families would have suffered their loss in silence and acceptance, but Tillman's family would not back down easy. Interviews with Tillman's mother Dannie show a thoughtful and articulate woman who just wants to know why her son was used to create propaganda after his death. His father has written numerous letters to find out why the circumstances surrounding his son's demise was so mishandled. Their efforts to bring to those responsible continue to be unsuccessful.

The years following 9/11 had people living with alert colors keeping us paranoid and ready to send our kids to fight. As years pass, and as clearer thinking prevails, movies like The Tillman Story will help bring to light how the government and media were active in manipulating our world perceptions. I remember the story of Tillman was on the front page, but the friendly fire story was buried inside the newspaper a couple weeks later. Bravo to the Tillman family in their fight to expose those culpable.
(Review by reesa)

Email ThisBlogThis!Share to TwitterShare to FacebookShare to Pinterest
Labels: The Tillman Story review