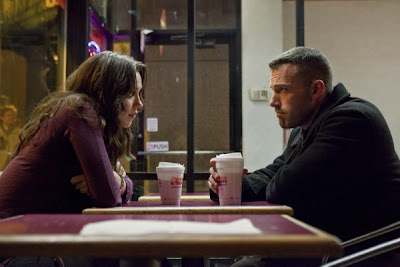 Charlestown, MA on the north shore of Boston, supposedly has the highest incidents of bank robberies than anywhere else. Four childhood friends are responsible for some of these jobs which are all orchestrated with well timed precision while wearing masks, timing of the vaults and keeping track of the police response. Their activities are vexing to the FBI who finally catch a break when during their last job, the crooks kidnap the bank manager and leave her unharmed blindfolded on the beach.

Ben Affleck who helmed Gone Baby Gone once more as director, writer and actor brings the small towns of the Boston area alive with the small streets and close community of it's inhabitants. Ben is Doug MacRay the son of a convict, Steve MacRay (Chris Cooper) currently serving 5 life sentences at Walpole. Ben had almost escaped carrying on the family tradition of crime when he was drafted in the National Hockey League. But he blew his chances and is back masterminding bank heists for Fergies “The Florist” (Pete Postlethwaite) the local crime boss. During the sudden and violent robbery of a bank, Jem Coughlin (Jeremy Renner) loses his temper when the bank alarm is set off and brutally beats up the bank officer and takes the bank manager Claire (Rebecca Hall) hostage. They eventually let her go unharmed but take her driver's license. Knowing where she lives Doug stalks her and eventually introduces himself at the laundromat when he sees how the kidnapping had affected her well being. Although he told his crew that he was just checking to see if she gave any information to the FBI (John Hamm as Special Agent Adam Frawley) he finds that he attracted to Claire and maybe a way out of his current lifestyle. Complicating the situation is Claire saw a tattoo on Gem's neck when he was beating up her boss during the robbery. Also Gem's drug dealing sister Krista (Blake Lively looking so opposite of her Gossip Girl rich kid) wants more of Doug than being a friend with benefits. Doug decides to tell Fergie that he's quitting but is blackmailed into doing one last job at Fenway Park and the millions collected from concessions. Special Agent Frawley turns up the heat when he reveals to Claire her new boyfriend is the one who kidnapped her.

The movie is taken from the 2004 book “Prince of Thieves,” written by Boston author Chuck Hogan which won the 2005 Hammett Prize for Excellence in Crime Writing. The screenplay by Affleck, Peter Craig and Aaron Stockard retains the rhythms of Charlestown and it's townie residents. John Hamm is solid as the all business FBI agent looking to trap the gang by whatever means necessary. Affleck once more proves his chops with the sympathetic criminal who wants to turn his life around. He's also quite buff and tattooed. This is a well paced drama, with exciting action sequences and an ending that will not make you walk out depressed.
(Review by reesa)

Email ThisBlogThis!Share to TwitterShare to FacebookShare to Pinterest
Labels: The Town review