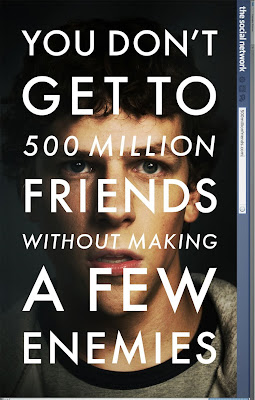 In an undergraduate bar near Harvard Mark Zuckerman is angrily complaining about being thwarted in his desire to join one of Harvard's elite final clubs when his girlfriend Erica dumps him. When he returns to his dorm, he takes his revenge by a nasty blog about her then comes up with Facemash a site that enables students to vote which women at Harvard are the hottest. With the help of his roommates they expand it to include all the colleges in the area. The response gathers 22,000 hits in a couple of hours and crashes the university's computer system. It's the year 2003.

Aided in this hack is best friend Eduardo Saverin (Andrew Garfield). They decide to share in it's growth with Eduardo as the Chief Financial Officer, Mark as the major programmer would have most of the controlling shares and the roommates with just a taste. Inspired by Mark's (Jesse Eisenberg) technical know-how, Winklevoss twins Cameron and Tyler (Armie Hammer), the super WASP Harvard crew champions want him to help create a website that would be a online community for Harvard students. He agrees to work with them, but instead avoids them through email. Meanwhile he takes the idea eliminating the snobbishness of the Winklevoss's proposal and perfects it creating The Facebook. The site becomes instantly popular growing from a local college level to nationwide. At this point the twins decide to bring him to federal court on charges of intellectual property theft.

Eisenberg's Zukerman is not really a nice guy. It's ironic that the founder of the world's most successful online “friend” community is not that good of a friend. Not only must he deal with the lawsuit from the Winklevoss twins, he must also fight with Eduardo when he slowly starts to bleed his share of the company from his CFO's control. Mark is not impressed with Eduardo's efforts to bring more funding to their project. Especially after he meets with Napster Sean Parker who had also dealt with lawsuits, and fame. Slickly played by Justin Timberlake, Parker is like the snake salesman dangling dreams of quick and easy money that could result from corporate financial infusion. He's the one who suggests they drop the “The” from their website name. With Sean's help Facebook moves to the silicon valley of California and quickly becomes the massive pop culture phenomenon. Eduardo was uneasy with Sean from the start which leads him to unfortunately being cut out during the restructuring.

Based on the 2009 book by The Accidental Billionaires by Ben Mezrich, writer Aaron Sorkin and director David Fincher has crafted a smart and tight film with an anti hero who doesn't really illicit much sympathy being the architect of his own personal failings. He's so disengaged from relationships and focused on his work that the damage in his wake is like a faulty programming code. But this computer genius, is also a bit of an idealist and not really in it for the greed. His Facebook has made Zuckerman into the youngest billionaires in the world and Facebook is available to everyone not just college students. Whether you believe the events in the movie, there is no doubt of the impact that Facebook has made to the world and all our “friends”.
(Review by reesa)