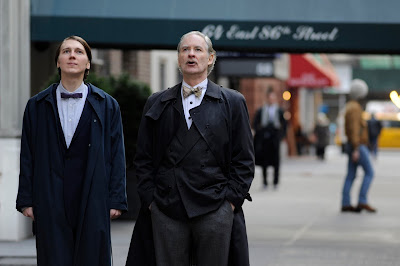 Louis Ives was teaching before losing his job when caught indulging in a fantasy with a piece of a woman's undergarment. He decides to go to Manhattan to pursue his dream of being a writer like his literary heroes Fitzgerald or Miller. He rents a room or more like a bed in a hallway to the bathroom from failed playwright and ex-aristocrat Henry Harrison who teaches Louis the art of accompanying and entertaining older wealthy women as an “extra man”.

Louis (Paul Dano) is a confused, closet cross-dresser who finds a job in sales at an environmental magazine. He becomes attracted to co-worker Mary (Katie Holmes) a self absorbed vegan but she is dating someone else. Louis decides to work out his cross-dressing urges by seeking out a professional he found in an ad, spankologist and cross dressing trainer Katherine (Pattie D'Arbanville). But this and trips to the tranny bars is not really what he wants either. His landlord/roommate, Henry (Kevin Kline) tells him that the last roommate was asked to leave for being a sexual deviate. Of course, the bigger than life Henry declares that his moral compass is “right of the Pope”. Henry says that “women shouldn't be educated...it effects their performance in the the boudoir”. Despite Henry's blowhard opinions and eccentricities he decides to take Louis under his wing and teach him on how to be an extra man or a “walker” who escorts wealthy ladies about town. His favorite is the very rich and very old Vivian Cudlip (Marian Seldes) who had once taken Henry to Russia. Peppered into this mix characters is Gershon Guren(John C. Reilly) who fixes cars and things for Henry. He's hairy like a troll and rides his bike around staring at Henry with whom he's mad at and refuses to talk with him.

Director-writers Shari Springer Berman and Robert Pulcini did a wonderful job with a quirky character like Harvey Pekar in American Splendor. In that one, only Harvey was the off beat person. The Extra Man has you wondering if anyone is the least bit normal. Kevin Kline embodies Henry like cream cheese on a bagel. Despite his mad hatter take on Henry, you can't stop watching to see what he will do next. Katie Holmes has really nothing to do here besides just look pretty. I don't know whose idea it was for Gershon to speak in a high falsetto, maybe it was in the book by Jonathan Ames from which the film is based. Paul Dano gives a very understated performance as someone trying to find himself in the craziness of his adventures. In the end, it's Louis who actually seems normal.
(Review by reesa)

Email ThisBlogThis!Share to TwitterShare to FacebookShare to Pinterest
Labels: The Extra Man