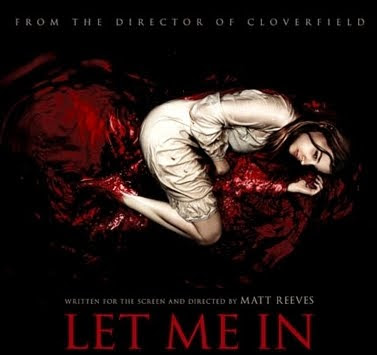 Horror lovers everywhere are anxiously awaiting the Matt Reeves’ (of Cloverfield fame) Americanized version of the 2008 Swedish vampire flick “Let the Right One In”, by debut author/screenwriter John Ajvide Lindqvist that mesmerized fans as it introduced two extremely isolated characters, Oskar and Eli, who form an unusual relationship against the backdrop of the stark, bleak icy Stockholm suburbs. Viewers will be wondering if the film has been improved upon but the first one is a tough act to follow with its frozen, moody yet beautiful settings and staging as well as the elegance and attractiveness of its characters.

This new versions stands on its own and is destined to become a horror classic in its own right, allowing it to reach a larger audience than the first, which was a multiple festival award winner including Tribeca, Austin Fantastic Fest and Austin Film Critics Association. Depending on what you are looking for, this film “Let Me In” will have something to offer those fans who love this genre.

This new setting is a wintry Los Alamos, NM in Reagan era 1983, where the president
is addressing the nation on TV about good and evil. Owen, a 12 year old isolated loner whose parents are divorcing, is going to have to make a choice. The film opens to police and paramedics driving through the snowy void transporting an older man (Richard Jenkins) to the hospital who has tried to commit suicide by pouring acid over his face and body. Kodi Smit McPhee is excruciatingly thin with large soulful eyes, not unlike a young Lucas Haas. Chloe Grace Moretz is fresh off her breakout role as Hit-Girl in Kick Ass and play the young vampire, Abby. She doesn’t quite possess the same sense of mystery and elusivity as her predecessor but her large luminous eyes and expressive lips pull you in all the same. Richard Jenkins plays her harried caretaker at the end of his rope, visibly weary of always having to kill to sustain Abby or clean up after her hunts and killing rampages, perpetually covering for her and protecting her from detection by those on the outside. His attempted suicide at the beginning, after an botched kill gone wrong, is for her, to protect her as well as to release him from his long served duties. He eventually succeeds in ending his life after the film goes back two weeks in time for the story of the unusual childhood sweethearts unfolds moving from their first meeting as she moves in next door to their eventual life long relationship.

There are clues from the beginning that these two are very different from their peers, yet alike with respect to each other. They are loners. She arrives barefoot in the snow and is
only out late at night. He is obsessed with knives, trouble by his parents failing relationship and fantasizes about exacting revenge upon those who bully him at school. He is a voyeur, peering via telescope into the lives and apartments of his neighbors a la “Rear Window”. Yet they find each other and connect.

The evolution of their relationship through preadolescent angst is touching and bittersweet as it progresses visually from first connection over puzzles, to first gentle hand to hand touch, to tender hug and finally to eventual commitment to going steady and forming a more permanent partnership. Teen angst and adolescent longing is all around but the sweetness of first connection is not lost.

American elements are intrusive and invade loudly from teen profanity, 70’s and 80’s music, vehicles, and a much larger sense of community around the pair. The soundtrack is peppered with dissonance and strange sounding voices adding to a growing sense of tension and eeriness as opposed to the more hopeful soundtrack of the original. Absent are the glorious and innovative lighting techniques using in the original film that created such a beautiful, ethereal mood and feel to the entire film.

Abby encourages Owen to fight back when bullied as he tries to become stronger in mind and body with her support and strength, eventually lashing out at the gang of three who so relentlessly and brutally pursue, torment and harass him though out the film. We all excruciatingly feel, through well chosen camera angles, his pain, desperation and loneliness so much it hurts. Her power and hold over him grows throughout the film toward two climactic scenes of a blood pact gone horribly wrong to when Owen clearly makes his choice between good and evil in a heart-wrenching bathroom scene. It is as if belonging anywhere is better to him than belonging nowhere at all.

Reeves kicks this film up a notch and a half- it is bloodier, bolder, more shocking and in your face as he does not hold back in showing Abby for the real monster she is. Behind her round, old -soul visage is a cold blooded animalistic killer. She is the one who must be invited in (as the head vampire of “Lost Boys” was), and we learn what happens if she is not- the blood letting of rejection. And revenge is so much sweeter with her on your side. So Owen chooses to invite evil in willingly. So achingly felt in the original, emptiness is all around from their wide, luminous eyes to the perpetually vacant playground, from her empty apartment to their empty lives devoid of positive human contact and expression. We never even really see Owen’s parents, which further separates him and us from those who should love and protect him. It is the sensitive and poignant relationship of the two preteens that is the star is this film. These two get more under your skin and into your psyche more so than in the original, which portrayed them through more of an air or mystery and detachment from each other.

A few effects distract. Super powdery snow that always looks exactly the same each night despite the sunshine in the day seems fake. Jerky, extreme movements via CGI when Abby converts to her wild animal predator vampire self are particularly bothersome and unnecessary. Her eyes and demeanor are all that are necessary to show her animal side. To this viewer, the Morrissey song from 1993 “Let the Right One Slip In”, from which the Swedish film title is derived, is better exemplified through Reeve’s film, being a song exemplifying adolescent longing and passage. Reeves brings the emotional pain as well as the physical. The audience should be pleased.
(Review by Cheryl Wurtz)