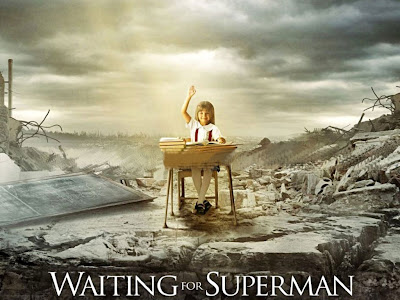 Geoffrey Canada, the founder of the Harlem Success Academy, a much-sought-after charter school in New York City, was disappointed to learn as child that Superman was not real and not coming to save him. That is why he and other dedicated teachers have decided to take on the super task of creating an environment for children to actually learn than from the entrenched and intractable system now in place.

The stories follow five students from inner cities and suburbs who have to enter a lottery in order to be selected for the highly sought after spots in the charter schools of their area. Families living in poor sections of town have so many obstacles keeping their children from obtaining a quality education that should be a right for all citizens of this country. The policies of “no children left behind” instead leaves most kids behind by insolvable and archaic teaching methods and assessments. Director Davis Guggenheim manages to address this situation through the eyes of the children and their families striving against all odds. Along with DC Schools Chancellor Michelle Rhee who must overcome her districts lowest eight grade reading proficiency rate in the country. Her fight to streamline and create new policy is prominently featured as well as the obstacles she faces from the American Federation of Teachers union that protect the incompetent and subpar among it's members. It's enlightening to discover that teachers tenure means that bad teachers are swapped from school to school or in New York are sent to the “Rubber Room” where they sit around for 8 hours doing nothing and collecting full pay and benefits.

Director Davis Guggenheim who did the Inconvenient Truth wrote with the film narrator Billy Kimball passionately opens the discussion on the state of our educational system that seriously lags behind the rest of the world. Watching the families as they await fate of their children at the lotteries will bring tears to the eyes at the disappoint and joy from the results. That we as parents should not have be put in the situation where chance is the only way we can secure the right of better education. But it doesn't end in a defeatist litany, it gives hope with the urge for people who care about the future of this world to invest and take responsibility to help bring about change. Because it's not “about the adults” as Rhee laments about the fight for better schools. At least it should be about the children and what kind of world we want to create for them. There is a way to activate and articulate educational reform by checking out the website at http://www.waitingforsuperman.com/action/
(Review by reesa)

Posted by Dallas Movie Screenings at 2:07 AM

Email ThisBlogThis!Share to TwitterShare to FacebookShare to Pinterest
Labels: Waiting for "Superman" review