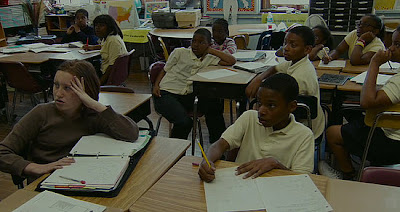 The five eager, wide-eyed children, whose pursuits of a better education are profiled in Oscar winning David Guggenheim’s ( An Inconvenient Truth) doc “Waiting for Superman” have one thing in common. Parents and families who care deeply about them and the quality of education they are receiving. Unfortunately generational poverty and economics has plunked these “middle achieving” students into neighborhoods served by low performing schools so their only choice is to apply to one or two “charter” or “schools of choice” for which the spaces are sadly few and far between and hundreds of applicants are entering the lottery for. Stiff competition indeed. The insinuation is that students in the more affluent suburbs will have good or at least competent teachers and schools by virtue of the neighborhood or district and these children are trapped in inner city LA, New York, D.C. and other metro areas, without much hope of a better future and without much choice as to how to make one. How incredibly sad as we watch caring moms and dads steer children who do care and want better towards horrific odds at a chance for a quality education. I ask myself, why do these children have to leave their neighborhoods to get a quality education. It seems it has been that way for a very long time.

The good news is that the doc shows that the Kipp schools have shown that lower income, disadvantaged, minority students CAN achieve in the right setting so now the gates are opened and there are no more excuses. It can be done. It is also universally agreed in the film what makes good schools good. That would be quality teachers. Why don’t all schools have quality teachers? The problem that is insinuated is rooted in governmental beaurocracy and teachers unions in many states who combine efforts and forces to prevent the districts from being able to get rid of poor or low performing teachers and really renovate the system the way educational experts know it must be done. It isn’t hard to see that it is difficult to make mass reforms in a school, much less and entire district when innovations and good ideas get bogged down by local boards, cities, counties, state and federal governments and mandates.

Too often I hear in my own school, “The state makes us do it.” or “It’s required by No Child Left Behind.” whether it is working or not. In many states these new ideas, innovations and reforms, if they even make it into the schools are to be implemented by old guard staff, burnt out and retained by a system that protects the low performing, incompetent and un-engaged teacher. One educator spoke of his frustrations over time when he recalled trying to repair the schools in a district he worked for and could not accomplish anything, with hands tied by committees, boards and the government. He was constantly walking through so much beaurocratic sludge and tar, he could not make any headway. Frustrated, he took his skills and ideas to another place, namely Harlem, and created programs that did work, where he was unencumbered by annoying and suffocating roadblocks to educational progress. Similar programs have broken through the oft held notion that the poor inner city child cannot be educated to the achievement levels of the suburban, middle to upper class child. Those children can learn and even exceed their more privileged peers in achievement given the right educational setting. The research has proven it. Barrier broken.

The film is intended as a brutal wake up call to America and is meant to make people angry. When looking into the faces of the children who did not get their school of choice, it just made me sad for them. Time to wake up, America. Every child has a right to an excellent education and it is up to all of us to demand it and see that it happens, for the good of the children, their families and ultimately our country. It costs less to privately educate a child that to support them in the penal system so the cost to our government is ultimately too high a price to pay.
(Review by Cheryl Wurtz)

Posted by Dallas Movie Screenings at 11:20 AM

Email ThisBlogThis!Share to TwitterShare to FacebookShare to Pinterest
Labels: Waiting for "Superman" review