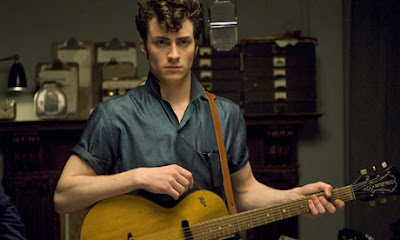 Before the Beatles became the world wide phenomena that took music to a whole other level, John Lennon was just another teenager in high school. Full of energy without real direction, John was a bit of a troublemaker much to the consternation of his aunt Mimi who was raising him. After the death of Mimi's husband John seeks out his real mother who turns out to live within walking distance. It's Julia who introduces him to rock and roll.

The young Lennon played by Kiss Ass Aaron Johnson who takes on a Liverpool accent. His Lennon is smart and full of wise cracks. His Aunt Mimi (Kristen Scott Thomas) only plays classical music in the house. His real mother Julia (Anne-Marie Duff) is more of a free spirit. She was probably bi-polar with moments of intense happiness and low depressions which her daughters call her sad place. John is fascinated by this wild child of a mother who wants to smother him with the love that she didn't give him while he was being raised by her sister since he was 5 years old. John is confused as to why his mother gave him up with only vague dreams and memories of his father. Julia encourages his budding music career and Mimi doesn't understand his artistic leanings. He assigns his classmates to be in a band that includes washboards and a banjo. After their first performance as the Quarrymen, he meets with Paul who impresses and threatens John's alpha male persona with his talent. Later George is brought into the mix as they become the 3 core members of the band.

Copyright limitations didn't allow the use of the early Beatles songs, which isn't really necessary in this story, but it would have been nice. It does show the influences that helped shape his music, coupled with the troublesome relationship of his mother and his aunt. Director Sam Taylor-Wood and screenwriter Matt Greenhaigh captured the raw emotional state of the early Lennon years. Thomas and Duff as excellent as they are seem almost too broadly contrast as they fight for John's affections. Johnson also makes a credible Lennon showing his insecure, vulnerable and emotional turmoil of the battling main women in his life. Input from Yoko Ono sparked a rewrite of Mimi's character making her less the dragon lady as many biographies have portrayed her. McCartney offered details on the music equipments and the mannerisms of the younger John. The story of how the group came together is worthwhile viewing, especially nice in light of John's recent 70th birthday. Only one other thing...having seen Lennon in person back in the early 70's, he wasn't that tall.
(Review by reesa)

Posted by Dallas Movie Screenings at 3:54 AM