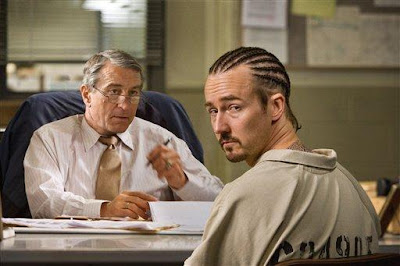 Jack Mabry threatened to toss his child out the 2nd story window when his frustrated young wife declared that he was killing her soul and she was leaving him. He apologizes and pleads with Madylyn not to leave him. Now married after 43 years, their daughter living in another state with her own family, Jack and his wife fill their days mediating on Bible passages, listening to Christian radio talk shows and drinking bourbon.

Jack (Robert DiNiro) has only a few short weeks before retirement at his job accessing prisoners as to their readiness to be paroled. He's beaten down by the drudgery of his job and the lack of meaning in his life. One of his last cases is that of Stone Creeson (Edward Norton) convicted in an arson/murder in which he was charged for being an accomplice his is eligible for parole after serving 8 years. Stone is a tough cynical character with a hillbilly accent. He knows that he must convince Jack of his worthiness to gain his freedom, but can't bring himself to play the game. Stone's secret weapon is his beautiful school teacher wife Lucetta (Milla Jovovich). Stone tasks her with using her feminine wiles on Jack in order to get Stone his parole hearing. Lucetta wears Jack down with her sweetness and her charms. Meanwhile Stone is exploring a spiritual cult which at first he wants to use a proof that he's a changed man. Shortly afterwards he witnesses a murder of another prisoner and experiences an epiphany that he announces to Jack that he had a religious revelation. Even Lucetta is confused by the difference in her usually randy husband. Jack feeling guilty and out of control over letting himself be seduced and manipulated by the suddenly transformed Stone.

Director John Curran (The Painted Veil) and writer Angus MacLachlan (Junebug) fills the screen with colorless and drab sets and vacant countrysides. Frances Conroy as Jack's long suffering wife lives with the decision to stay with Jack by self medicating herself with cigarettes, alcohol and religion. The constant soundtrack of religious radio stations must mean something, but it's never quite clear. Jack was never a demonstrative type of man finds himself awash with long suppressed emotions. The verbal sparring between Jack and Stone is the only thing alive in the whole film as the two power actors try to create some fire from the ambiguous storyline. There are some amusing situational moments that hold promise, but the buzzing that begins and ends the movie is just that...constant noise and no substance.
(Review by reesa)