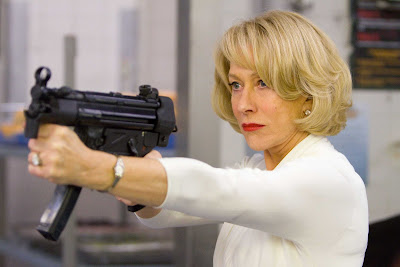 Frank Moses lives alone in a suburban house going about the daily steps of living. He even decorates his yard with Christmas themes to appear normal to the neighborhood. The only excitement he gets is when each month he tears up his government pension check then calls Office of Personal Management to say he didn't receive it. It's obvious that he's only calling because he wants to carry on a conversation with Sarah Ross the woman in charge of his account because he likes the sound of her voice. When he suggests he may be coming to Kansas City, they tentatively agree to meet. That meeting turns out to be sooner than expected when his house is suddenly attacked by armed and deadly shooters who completely destroy his home from gunfire.

Turns out Moses (Bruce Willis) is classified as RED – Retired – Extremely Dangerous. He slips through the attackers with little problem, but realizes that Sarah (Mary-Louise Parker) will also be in danger. He apologetically drugs and kidnaps her to keep her safe. Meanwhile he looks up some other colleagues Joe (Morgan Freeman), Marvin (John Malkovich), and Victoria (Helen Mirren) who agree to help him find out why they being targeted. On their trail is operative (Karl Urban), a highly skilled and intelligent agent. He is not told why he's after Moses and his crew, but he begins to get a nudging doubt when Moses leaves him little clues as to what is going on. A visit to the secret CIA record keeper Henry (Ernest Borgnine) reveals that Moses and company had been witness to a big cover up that will take them deep into the CIA and the Whitehouse.

Preposterous, over the top and deliciously amusing director Robert Schwentke and screen writers John and Erich Hoeber created comic book AARP heroes. Willis plays Willis no matter what film he's in, but he's complimented this time by the marvelously goofy Mary-Louise Parker who he kidnaps to keep her out of harms way. She steals the movie rug out from all the big named celebrity talent. None of the actors really stretch beyond confines of their roles, but Helen Mirren is a hoot as the retired hit woman who still takes jobs on the side while living at her quiet estate. Mirren never looked sexier picking off charging troops with a high powered rifle. The film is playful and ready for hopefully a continuation of more RED adventures.
(Review by reesa)

Posted by Dallas Movie Screenings at 4:00 AM