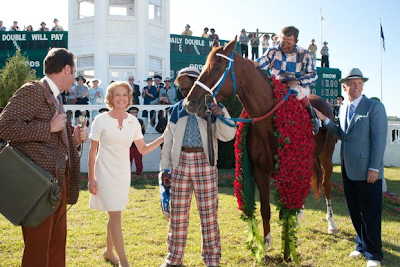 In 1969 a Colorado housewife Penny Chenery learns of her mother's passing at the Kentucky horse ranch where she was raised. She returns home for the funeral with her 4 children, and lawyer husband to discuss the disposition of the house and horses. Her father suffering for dementia cannot handle the estate on his own. She decides to stay awhile to take care of business and in the process realizes that the race horse business is in her blood.

Penny (Diane Lane) falls easily into the rhythm of horse ranch. She fires the trainer who was taking advantage of her parents. She seeks advise from her father's friend and lawyer, Bull Hancock (Fred Dalton Thompson) who recommends French Canadian Lucien Laurin (John Malcovich) who dresses like Superfly and wants to retire. He turns her down until she tells him of the coin toss in which her father traded one of the resulting foals from his two best mares in exchange for stud services from Bold Ruler owned by Ogden Phipps (James Cromwell). Penny and Lucien agree with which colt would show the most promise. Fortunately for them Phipps the winner of the toss picks the other horse. Big Red as he's affectionately known shows great promise. He is named Secretariat after the family's faithful secretary Ms. Ham (Margo Martindale). Penny spends the next 2 years going back and forth from her housewife chores in Denver to running the ranch and getting ready for Red to run his first race. Red doesn't win the first time out but afterwards with another jockey Ron Turcotte (Otto Thorwarth) he wins enough to be named Horse of the Year. After her father passes, the estate is threatened in inheritance tax of $6 million. Her academic brother Hollis (Dylan Baker) and her husband Jack (Dylan Walsh) advise her to sell Secretariat. Instead Penny in a radical move syndicates stud services from her horse that has yet to prove his worth. Her tenaciousness proves fruitful when Secretariat goes on to win the triple crown, three major races whose records still stand today.

Director Randall Wallace best known for writing Braveheart and writer Mick Rich worked from William Nack's book Secretariat: The Making of a Champion who also consulted on the film. As a Disney film one is sure to get formulaic and instant feel good saga of animal athletic prowess. Diane Lane dressed in vintage Talbot style clothes with perfect hair shoulders the stubborn winning spirit she instills in those around her reflecting her horse's pride and achievement. The conceit of this story is that in the late 60's and early 70's women were still in the early stages of women's liberation and her strength and stick-to-it-ness shines as an example to her family especially her teenage daughters. Lane despite being saddled with greeting card dialogue manages to convey steely hard as nails attitude dressed in a southern ladylike charm. Scott Glenn as her ailing father doesn't have much to do besides offering phrases like “let him run his own race”. Malkovich peppers his character with French swearing and crazy attire. Nelsan Ellis of True Blood is more subdued at Eddie Sweat who spends more time with the horse than anyone else. The racing scenes are well photographed bringing you close to the horse's perspective. Even though you know which horse will win in the end, everyone will walk out a winner.