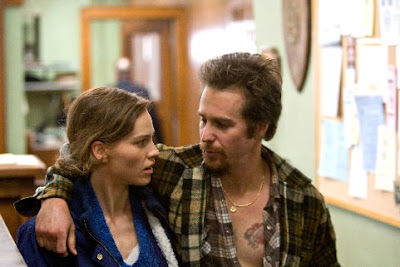 In 1983 Kenneth Waters was charged with the murder and robbery of a next door neighbor for which he was convicted and incarcerated for life. Convinced of her brother's innocence, Betty Anne Waters completes her GED so that she can go to college and law school so she can free him.

Hillary Swank portrays Betty Anne with all the earnestness and sincerity of a working class mother from Ayers, Massachusetts with the same grit like in her previous roles playing real life people. Her all encompassing single minded passion at keeping the hop alive for her brother breaks up her marriage, and her boys move in with their dad and his new girlfriend. Betty Anne befriends another classmate Abra Rice (Minnie Driver) who insists that they become aligned as they are the oldest people in their class. With Abra's assistance in discovering new DNA evidence and with the help of Barry Scheck (Peter Gallagher) of the Innocence Project that aids those wrongfully convicted, Betty Anne wins Kenny's freedom after 18 years.

Actor Tony Goldwyn best known from Ghost but more recently as a director of TV shows likn Justified and Damages stages a linear story with a few flashbacks of their childhood to explain the closeness of the siblings. The were 2 of nine children born a year apart all from different fathers. They were co-conspirators skipping school, stealing candy and breaking into neighbor's homes to play house. Screenwriter Pamela Gray (A Walk on the Moon) keeps the project from being just another underdog movie of the week. It also skips over how Betty Anne who works at Aidan's pub as a waitress (later in life she becomes the general manager) can still go to college and law school and raise two sons. All the while visiting her brother in prison who becomes sullen and violence prone and eventually tries to commit suicide. It is also unclear as to why the two main witnesses for the prosecution Roseanna (Juliette Lewis) and the mother of Kenny's daughter Brenda (Clea Duvall) had lied during the trial. There is some implication that the arresting officer Nancy Taylor (Melissa Leo) had threatened the women to do it but for reasons that are unknown in the story.

Swank and Sam Rockwell as Kenny Waters do a credible job with passable Boston area accents. Her devotion to her brother's case is inspiring in the face of everyone's insistence that she let it go and get on with her life. Today the real life Betty Anne Waters does not practice law but besides the pub she continues to work as an advocate with the Innocence Project to help people wrongfully convicted. It's also bitter sweet that six months after Kenny was released from prison that he died after hitting his head while taking a shortcut home.
(Review by reesa)