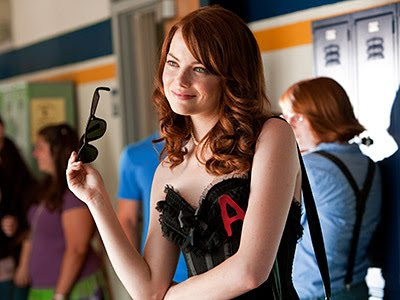 A thought occurred to me the other day while screening Easy A. Hard to imagine I could have any thoughts at all during or after watching this movie, but there it was burning away in my mind. I tried to ignore it, to distract myself with the bubblegum camp of this movie... but it was too sleek and over produced to be considered for that. I instead tried to focus on the smart script and clever writing... but the comedy was a bit over the top, with the actors trying to oversell the plot with mugging and exaggeration as both plausible and hilarious. Finally I searched desperately through the theater for others in the same predicament as I... but I found something very similar to what was seemingly hot and palpable in my mind. The crowd was enjoying this movie and sadly, so was I.

But why? What redeeming value did this movie have?
My answers came to me from reviewing the simple but accessible plot.

In synopsis: A over enthusiastically scholastic teen who is super hot, but apparently lacking in social skills can't get laid. She impulsively lies about losing the big “V” and with a “dash” of flair, spontaneous blossoming, and help from the classic book “The Scarlet Letter”, flips her whole situation upside down and wears her “A” (See what I did there? ;) with charming panache as she lies her way up and down the halls of Ojai high school. She manages to make a mess of her life as she contracts fake sex acts for money and fame, through the awesome speed of social networking and has to come to terms with the parity and parody of her life as it compares to Hester Prynne's.

But even after this understanding, I still was left wanting. I looked to the cast.

The bible tart Marianne (Amanda Bynes) provided bubbly antagonism. The handsome Woodchuck/Lobster Todd (Penn Badgley) provided convenient romance. Faculty Mr. Griffith was the man, mainly cause Tomas Haden Church (who plays him) is the man. Lisa Kudrow is in this movie but I only give her a mention because of the wonderfully funny surprise she provides.

All of them pale in comparison to Olive (Emma Stone).

Then it hit me... It was in consideration that I truly found out why I was enjoying this movie. Emma Stone is freaking hot, and she plays the witty and awkward Olive with a sexy, verbose confidence. It was as simple as that. I fell in love, and was willing to over look all of the glaring flaws that I learned to hate about movies of this genre.

So in layman's terms, I love Emma stone, the movie is merely OK.
(Review by Quinn Cruz-Hawkins)

Posted by Dallas Movie Screenings at 12:55 AM

Email ThisBlogThis!Share to TwitterShare to FacebookShare to Pinterest
Labels: Easy A review